Warning: Use of undefined constant get_magic_quotes_gpc - assumed 'get_magic_quotes_gpc' (this will throw an Error in a future version of PHP) in /nfs/c02/h03/mnt/16851/domains/footballgameplan.com/html/wp-content/plugins/cforms/lib_functions.php on line 360
 2015 Celebration Bowl Preview: Tale of the Tape | FOOTBALL GAMEPLAN
FOOTBALL GAMEPLAN
Login | Register
follow us: 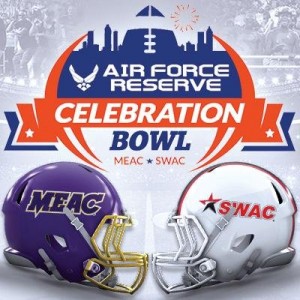 The Inaugural Air Force Reserve Celebration Bowl will bring together North Carolina A&T, the best from the MEAC, and Alcorn State, the best from the SWAC, on Saturday December 19th at Noon on ABC. Both teams are going to make this a memorable bowl game and we wanted to dissect the matchup further and determine who has the greatest opportunity to emerge victorious.

Both A&T’s Rod Broadway and Alcorn’s Jay Hopson inherited programs that were in the basement and have orchestrated turnarounds that have their squads in the penthouse.

Broadway, a defensive-minded coach, has hung his banner on improving defenses wherever he’s landed. He understands the HBCU climate and has thrived in it for several years. His coaching background also includes a stay on Steve Spurrier’s staff at Florida from the mid-90’s until 2000. That attacking style SEC defense can be seen in his Aggies. His defenses have been great at limiting opponents in the run game and making them one-dimensional. Once his defense has you focused on passing, he unleashes the pass rush and is able to create havoc for opposing quarterbacks.

Hopson also comes from a defensive background but Alcorn is his first experience with HBCU programs. He really made a name for himself in Conference USA as the defensive coordinator at Southern Miss and Memphis. However, on “the reservation” his teams have been better known for their offensive prowess. The run-heavy dynamic of the team definitely fits his defensive-minded nature, but they have been able to roll up major numbers while leaving opponents in their wake.

Advantage: Push! Both coaches have a pedigree that leads one to believe that X’s and O’s are not going to be a determining factor. It may be who manages their team the best.

The injury to Alcorn State signal caller John Gibbs Jr. gave birth to the emergence of Lenorris Footman. Both have the ability to pass and run. Gibbs is more polished as a passer, while Footman seems to be more explosive as a runner. Whomever the Braves decide to go with, they have the luxury of allowing their quarterback to play with more reckless abandon because they are very confident in the backup.

A&T has a couple of dual-threat quarterbacks as well in Lamar Raynard and Kwashaun Quick. Both guys seem to be asked to operate their offense and take advantage of turnovers forced by the defense. We will most likely see both guys during the game and one would surmise that, whomever has the hot hand will get the majority of snaps.

Advantage: Alcorn State Both QB’s can kill you and will be a problem to handle during the game. The Braves and Aggies ask their quarterbacks to do similar things, the Braves are just better at it.

A&T relies heavily on the play of Junior Tarik Cohen who rushed for over 1100 yards this season. He has also accounted for 13 of the 35 offensive scores this year. He’s one of the most dynamic runners in the FCS.

Alcorn counters with a beast of their own in Senior Darryan Ragsdale who has posted very similar numbers. The offense doesn’t rely solely on him, which allows him to operate.

Advantage: Push! The advantage that Cohen may have in skill is negated by the eight and nine man boxes he will see. The pass game and threat of legitimate running quarterbacks keeps the box pretty balanced for Ragsdale.

Both offenses lean heavily on the run game so the wide receivers have not been as big a factor as they could be, but there is still talent on both sides of the ball.

The Aggies Denzel Keyes is a touchdown maker and a red zone problem for defenses. At 6’3” 200 pounds, the junior has a knack for catching touchdown passes (8).

Senior Jordan Payne is the deep threat for the Braves averaging a whopping 26 yards per reception to go with his seven touchdowns.

Advantage: Push! Both lean on the run and have a guy or two in the pass game that can make you pay for a nosey safety.

Both offensive lines are more adept at run blocking than pass blocking.

A&T has a massive, but young offensive line that is anchored by senior Nicholas Dease. They will return five guys next year with significant experience

Hopson admits that his experienced offensive line is a major factor in their success. Most of the guys have multiple years playing together. That continuity has proved too much for some opponents.

A&T is only allowing 73 yards per game on the ground and that is primarily due to the play of the two junior defensive linemen, Angelo Keyes and Marcus Ragland. Both are extremely stout at the point of attack and do a great job displacing the line of scrimmage.

Alcorn relies on a trio of athletic defensive ends to chase down runners and disrupt passers. Stacey Garner, Darien Moody, and Ramonte Bell all have 5.5 or more sacks and have a knack for getting to the ball carrier.

Advantage: A&T! Their ability to shut down the run will be paramount against Alcorn State’s six-headed monster.

The Braves have size, speed, and experience at the position. Senior Darien Anderson and Junior Damon Watkins both have over five sacks and make plays sideline-to-sideline. They work perfectly with their athletic defensive line.

A&T has some undersized, but tough and intelligent players at the second level. Senior Denzel Jones and Freshman Julius Reynolds are both 5’8” but both pack a punch and know how to hide behind a massive defensive front.

Advantage: Alcorn! They are just too big and fast to ignore. They will be a major problem or the Aggies offensive line.

At 6’3” 195 pounds, the Braves Eric Foster has enough size to deal with tall receivers in the jump ball game. He’s also not afraid to come up and hit you which is why he is third on the team in tackles. With such an aggressive Braves defense, the DBs have to play hard-nosed so that opposing quarterbacks can’t dink-and-dunk over pressure.

Aggies Senior Tony McRae is only 5’9” but he leads the team in tackles (47) and interceptions (3). He’s been a shiny spot in the middle of a defense that has shined all season. He will be needed in the run defense against Alcorn.

Advantage: Push! Both defensive front 7s get so much pressure on the ball that they don’t need to cover long, so it’s hard to truly get a feel for how good they are.

Both teams are dangerous in the return game and both lead their respective leagues in kickoff return average. Both have returned two kickoffs for touchdowns. A&T has a slight edge in punt returning, but their coverage units are subpar which Alcorn has one of the best in their conference.

Advantage: Alcorn! The A&T coverage unit might give one up.
Whichever way you are leaning on Saturday, you can be sure that the action during the game is as exciting, or more as what transpires at halftimes.