When Grambling State and North Carolina A&T take the field at Mercedes Benz Stadium in the Celebration Bowl, it will represent more than just the kickoff of the bowl season.

It is easy to forget that HBCU programs are an important part of the history of college football and its current landscape, but when they are acknowledged, it seems to be commonly linked to the play of their bands rather than their athletes. There is great football being played at HBCUs, but for years they have been scarcely represented in the FCS playoffs and non-existent in bowl games. 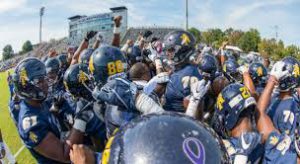 Exposure is the name of the game in college football and is something many HBCUs have struggled to gain over the years. Outside of “Classics”, historically black programs have been kept in the shadows. The two prominent HBCU conferences, the SWAC and the MEAC, have been fighting for relevance on the national stage while also honoring their rich traditions. This has left many programs trying to balance the team’s need for success on the field with the need to honor tradition.

The Celebration Bowl is a way for he underrepresented conferences and their teams to bridge that gap. It’s an opportunity to be recognized as one of the nation’s best while still paying respect to the traditions that make the HBCU experience so unique. And it’s been received well by the nation for one reason: It has put more emphasis back on the football and less on the show.

In the two seasons of this bowl game’s existence it has featured four different schools, North Carolina A&T, Alcorn State, North Carolina Central, and Grambling. This has given the stage to lesser known NFL talent.

The inaugural game was a coming out party for current Chicago Bears rookie running back Tarik Cohen as he lead A&T to a 41-34 victory. In the process, he destroyed one of the best defenses in the FCS. He ended the day with 348 yards from scrimmage and three rushing touchdowns. It was the nation’s first time seeing him live and a great opportunity for every scouting department to pay serious attention to the first Celebration Bowl offensive MVP and the future fourth round pick.

The next season was a matchup of two future pros on the perimeter as current Cardinals Rookie receiver Chad Williams lined up out wide for Grambling guarded by the Buccaneers safety Ryan Smith for North Carolina Central. Williams was drafted in the third round and Smith in the fourth. 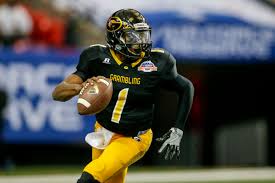 That’s one draft pick in the Bowl’s first season, two in its second year. This year there are three prospects from Grambling (quarterback DeVante Kincade, running back Martez Carter and offensive lineman Trent Scott) and at least one player from A&T (offensive lineman Brandon Parker) that are expected to be drafted or at least have serious opportunities to make NFL rosters.

This is not coincidence, its convenience. Bowl season as always been the launching point for evaluators to begin deeper digs for talent. It gives them an opportunity to see over 80 teams live without ever leaving their couch or jumping through hoops to get video. So it’s not surprising that now there’s that same platform for HBCU schools to take advantage of.

And don’t think this is the end. The Celebration Bowl has proven that there is a national hunger for good HBCU competition and I would not be surprised to see another HBCU game emerge in the near future.