While the pundits want you to believe that Clemson quarterback DeShaun Watson needed to be at the Senior Bowl, they predictably slept on another Clemson underclassmen who is eligible for the Senior Bowl because he graduated in three years; wide receiver Artavis Scott. 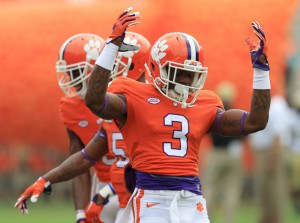 For three seasons Scott has been a playmaker for the Tigers. Whether it’s lined out wide, in the slot, and on special teams, he’s been electric with the ball in his hands. In his freshman season, Scott hauled in 76 receptions for 965 yards and eight touchdowns. He announced to the nation that he would be a problem going forward. The next season with Mike Williams out for the season, and the receiving corps filled with first and second year players, Scott performed like a senior hauling in 93 receptions for 901 yards. This past season as a part of the most dynamic receiving corps in college football, he still managed to equal his freshman receptions total while adding another five  touchdowns.

The consistency in his production, and his ability to elevate his game when needed, will surely be missed by the Tigers and welcomed by whatever NFL team selects him during the draft. Playmaking ability and versatility are a couple of the traits that have Scott in a position to reach his dream. But there’s another underrated aspect to his game, his toughness. He’s played a LOT of football. He goes across the middle. He catches in traffic. He breaks tackles and gains extra yards after the catch. He catches balls in areas where he is completely vulnerable and after every big hit, he gets back up. While toughness isn’t a skill, it’s definitely an attribute that not every player possesses.

He has played in 42 games in his three seasons at Clemson. That’s like playing four college seasons in three. The 15 games played in each of his final two seasons as a Tiger are only one game short of a full NFL regular season. This is added value because it’s unlikely that Scott will fall into a rookie slump. Early graduation also ensures that he can focus solely on football and doesn’t have to worry about finishing up school in the Spring. There will also be no restrictions on his involvement with his new team because of this.

Scott has set himself up to take advantage of every opportunity available to him. This week at the Senior Bowl he will continue to show his value at the next level. In the end he hopes that it will lead to a phone call by an NFL executive. He doesn’t have to hope too hard.