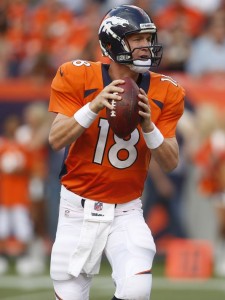 Quarterback is the undisputed premiere position in the National Football League. Quarterbacks “move the needle” and if your team is without what is considered a franchise quarterback, then you have little to no chance for success. When considering the type of quarterback necessary for success in the NFL, many looked at Peyton Manning as the prototype. While Manning has established himself as one of the most effective quarterbacks ever, it has not equated to multiple championships.

Today’s NFL is bigger, faster, stronger, and more intelligent. With more complex and athletic defenses, the need for a quarterback with the ability to escape the pocket and break tackles has put a new value on quarterbacks with athletic skills. Ask most of the mainstream NFL analyst who the new prototype QB is and they will, without hesitation, say Andrew Luck. Luck is considered to be Peyton Manning with athleticism. He has the intelligence (Stanford educated) to perform mentally and the athleticism to be a weapon when he decides to pull the ball down.

The reality is while many drool over Luck and his talents they dismiss the real new prototype quarterback as gimmick.

Like Luck, Cam Newton was the number one overall pick. He was chosen the season before Luck declared but many believe that if Luck would have put his name in the hat he would have been chosen over Newton. Besides, many believed Blaine Gabbert was a

better quarterback prospect than Newton anyway (take a moment to process that).

So why do people speak about Luck as if he has arrived and about Newton as if he still has something to prove? Where is the separation? It must be wins. Not only is the NFC a more superior conference, the NFC South is a tough division. The AFC south is considered by many to be the worse division in the NFL; so do we really want to use win/loss record as a barometer?

So where’s the separation? It’s in their running ability. While their passing stats don’t give a clear definition of greatest, the rushing stats separate the two and pushes Newton far ahead of Luck. Newton’s rushing yards doubles up Luck’s (1,447 yds to 632 yds) and his rushing touchdowns are nearly two and a half times as many as Luck’s (22 to 9), his longest rush is 72 yards, which is 43 yards longer than any Luck run in the NFL, and his yards per carry is still higher than Luck’s (5.7 to 5.1).

So, why do people speak about Luck as if he has arrived and about Newton as if he still has something to prove? 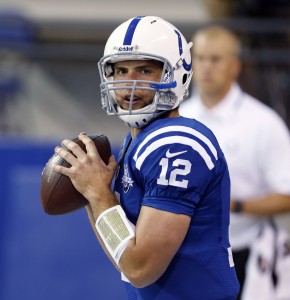 Is it because Luck says “gee” and “shucks”, while Newton shows pride in what he accomplished? Is it because Newton is a media poster child and Luck seems to run from the spotlight? Luck wears his hat forward; Newton turns his hat to the back. Luck went to a top academic school and Cam went to an SEC school. Luck runs to the sideline after touchdowns and Newton does his Superman celebration after touchdowns. Luck is Midwest and Newton is Hollywood. Luck is scruffy with a beard and Newton is clean cut with a bright smile. Luck is country music and Cam is hip hop! The management identifies with Luck while the workers identify with Newton.

None of those things actually have a bearing on the way they play but it definitely makes people think of the two differently.

Maybe you should ask yourself. Do I really have it right if the stats don’t support the argument?