The salary cap in the NFL has enabled its owners to make more money than any other owner in any other league because it makes them spend their money wisely. It’s impossible to buy a Super Bowl because you can’t afford to pay all the best players. The NFL’s salary cap has created parody unrivaled by other professional leagues.

Organizations know this and as a result player development is paramount in building a championship contender. While a team may splurge on a few free agent purchases, the nucleus of their team is built through drafting and/or acquiring young talent and developing them to fit a system. This is why the NFL Draft has taken a place of prominence in the spring sports landscape. Fans have become more aware that these college kids who are drafted or signed as free agents will comprise the majority of the roster.

The reason why bad NFL franchises remain bad is because some organizations refuse to exhibit patience, and build the only way that has been proven to provide an organization with stability. Obviously one can’t have stability in their program without stability at the most important position in an organization: the head coach. 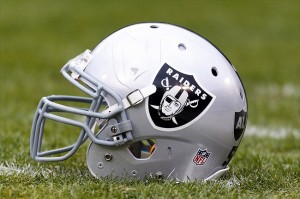 The Oakland Raiders are a model of inconsistency at the head coach position and as a result, the development of their talent has suffered. Since former Oakland great Art Shell’s first exit as head coach following the 1994 season, the Raiders have employed 12 coaches. Twelve coaches in 21 seasons if you count the Raiders new hire, Jack Del Rio, who will man the sidelines in 2015; but he better get the job done quickly. Raider coaches are averaging 1.5 seasons before they are shown the door. That’s not much time to build a culture and develop talent to fit that culture.

That inconsistency is especially rough on players. Coaches have different philosophies which usually result in them wanting to develop the type of players they feel fit their system best. Because most coaches are ego-driven, they are convinced that their system is the best way to be successful, which is usually to the detriment of the current players. Look no further than the Philadelphia Eagles for that example. 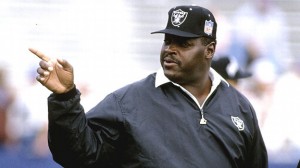 first departure is 5.5 seasons. The reason why that average is so low for 1st round picks has less to do with who was chosen and more to do with inconsistent training. Those 21 draft picks played for average of 3.5 coaches during their time in the silver and black.

Those numbers are staggering! There’s no way to believe a player could ever realize their full potential with that albatross flying around the organization. The results have been evident. The list of 21 first-round picks feature many supremely talented players who never lived up to their potential, but was that entirely their fault? Where was the motivation, the belief, the system, the culture?

“Just win baby” is an impatient philosophy. It doesn’t put up with substandard seasons. It doesn’t allow for growth. 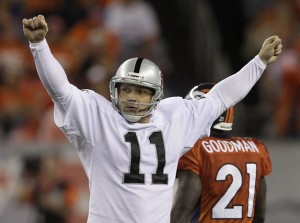 The longest tenured Raider during this period has been Sebastian Jankowski and as a kicker, he was essentially immune to the changes in coaching. When Jankowski starts his 16th season, he will have kicked for 10 different head men. One could make the argument that more consistency could have encouraged “Sea Bass” to stay in better physical shape over the years. The truth is that he knows that any coach who gives him a hard time about his weight will probably not be around long enough for him to care what they think.

Future Hall of Famer Charles Woodson comes in second with his 11 years of service across two separate tours of duty. He’s played for six coaches in his time with the Raiders but only one in the seven seasons he spent with the Packers. It’s probably why he had his best stretch as a Packer, including helping Green Bay win Super Bowl XLV. Since returning to the Raiders two seasons ago, he has already played for two coaches and will add another to the list when they kickoff under Del Rio.

More alarming is when you take those stalwarts out of the equation, the number of coaches Raider players have had decreases from 3.5 to 3 coaches. However, the number of seasons spent with Oakland also decrease significantly from 5.5 to 4.6. This means that those players only saw the same head coach for a little over one season. How can that possibly be a positive for player development?

Speaking of player development, enter Jamarcus Russell. Many have been perfusive in their belief that Russell was a bust. But who has sat down and really examined his time with the Raiders? Russell had two coaches in three seasons. Oakland made him the first overall pick in 2007, then tried to pay him less than the going rate for first pick quarterbacks. Subsequently he missed an entire training camp, and spent his one season with then head coach Lane Kiffin trying to play catch up. 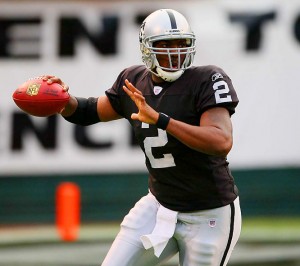 One year wasted. Bye Bye Lane! In steps a coach in Tom Cable who doesn’t believe in Russell, is not dedicated to developing him, and knows they even if he was dedicated, the organization wouldn’t give him the time necessary to complete the task. “Just win baby!” Russell spends one year starting, one year getting benched, and ends his career by being cut and cut down by the same franchise who thought he would be the savior three years earlier.

Say what you want about Russell but you can’t name a quarterback, past or present, who would have survived under those circumstances. 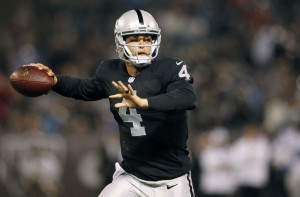 pick to develop. Hugh Jackson was shown the door following one season with no first round draft pick because he rolled the dice on Carson Palmer. In stepped Dennis Allen who had no first or second round pick in his first season. In his third season he was given the same papers as the nine coaches before him. Now the new blood of the Raiders, D.J. Hayden, Khalil Mack, and Derek Carr, will be dealing with their third head coach in their brief careers. Will Del Rio mark the end of the revolving door of coaches dawning the silver and black? History says no and it also says that the fate of the young talent on the Raiders rest solely on the patience of management.