Football has long been a landscape where the feats of its members spawn vocabulary that becomes a part of society’s accepted vernacular. Words like “juked,” “trucked,” and phrases like, “give him/her the Heisman,” or “get it across the end zone,” are only a few of the colloquialisms that have been adopted from football. Probably the most famous of them all is, “Moss’d!”

This is a word affectionately named after former NFL super freak Randy Moss, who routinely needed to jump over multiple defenders to catch the ball. Now anytime a receiver out-jumps a defensive back to catch the ball, that defender has been “Moss’d!” It is really a testament to just how good Moss was, and how he resonated in the pop culture-like climate of sports.

There is another verb that should be added to the lexicon, “Wilson’d!” The official definition can be: When one person unexpectedly takes an incumbent’s position. 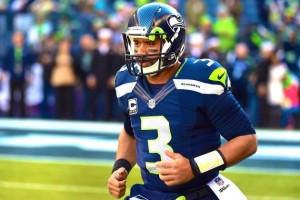 When Russell Wilson, quarterback for the Seattle Seahawks, arrived in Seattle in 2012 as a 3rd round pick, most did not expect him to make an immediate impact. That includes the team that drafted him because they went out and signed former Green Bay Packers starter Matt Flynn, to a 20 million dollar deal to be their starter. The rest is history and wasted money by Seattle.

Last season, most fans and media members believed that Jacob Coker would be the starter when he transferred from Florida State to Alabama. However Blake Sims, a quarterback turned running back, returned to quarterback and had other ideas. The results: Sims had a very successful season for the Tide and is now playing in the CFL, while Coker was “Wilson’d” and may be again this season. 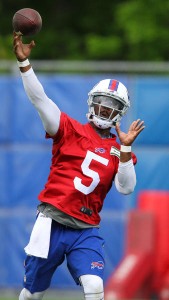 consistently mediocre starting quarterback Kyle Orton decided to retire, the Bills traded for journeyman and mediocre backup quarterback Matt Cassel and his 10 million dollar contract he signed with the VIkings last season. They also signed, for much less money, Tyrod Taylor who was thought by many to give the Bills a serviceable backup for Cassel and allow first round draft pick EJ Manuel to take a redshirt year.

A funny thing happened on the way to week one of the regular season. Tyrod Taylor and EJ Manuel have thoroughly outplayed Matt Cassel. It is a rare occasion to see a minority quarterback who has never been a starter, get a legitimate shot at the job.  But if anyone is willing to break the trend, it is Rex Ryan who seems to be favoring playmakers over conservative chain movers. There is no doubt Cassel should be “Wilson’d”, what should be in doubt is the need to have him on the active roster come week one.

The action verb “Wilson’d” is also unique because to comfortably fits into pop culture. The 2000 Tom Hanks one man show Cast Away, stars Hanks opposite a volleyball named Wilson that has become his personal companion while marooned on a desert island. Eventually while trying to get out to sea, Wilson gets away from Hanks and slowly floats away being left behind and never heard from again.

That narrative fits what happened to Matt Flynn when he was beat out by Wilson. He’s bounced around from team to team and has existed in relative obscurity. I fear that is the path Coker is heading down in Tuscaloosa and it should be Cassel’s fate as well.

“Wilson’d!” Spread the word and somebody call up Urban DIctionary. There’s a new entry.