Warning: Use of undefined constant get_magic_quotes_gpc - assumed 'get_magic_quotes_gpc' (this will throw an Error in a future version of PHP) in /nfs/c02/h03/mnt/16851/domains/footballgameplan.com/html/wp-content/plugins/cforms/lib_functions.php on line 360
 FBGP’s 1st and Forever – Worthy Ideas from Across the Pond | FOOTBALL GAMEPLAN
FOOTBALL GAMEPLAN
Login | Register
follow us:

FBGP’s 1st and Forever – Worthy Ideas from Across the Pond

Worthy Ideas from Across the Pond

For years now NFL commissioner Roger Goodell has looked for ways to grow the game. He has repeatedly made it known of his desire to have a team in England. I agree that Goodell 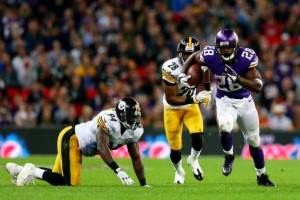 should look to England for a way to grow the game, but his error is in believing that a franchise across the pond would bring the league newfound prosperity. In fact, there are so many untapped markets here in North America.

The question is how do you expand the game without saturating the league? How do you keep franchises from becoming irrelevant? How do you add more teams and add more excitement to a game that seems to be at the height of its power? You answer all of these questions and more with two words: promotion and relegation. For those of you that don’t know what those two words refer to stay tuned for those of you rolling your eyes at the idea, finish rolling them and then stay tuned.

Expansion is easier than many believe it is. There are so many cities that a franchise would work in; places where football would be embraced or is already being embraced. The NFL should create another conference, it can be called the Federal Football Conference (FFC) and while it will be a part of the NFL it would operate as a completely separate league with its own playoff and champion. The FFC would be a 12-16 team conference and the top four teams would be promoted to the AFC and NFC for the next season.

At first thought I myself laughed at the notion but then I began to think, would I notice if Jacksonville, Detroit, Buffalo, or Oakland were replaced by another ball club? If those teams are going to be non-factors every year then why not give another team a try?

These are just some of the cities I believe that an NFL team could thrive in:

Promotion would give these teams hope because they have a chance to be in the NFL’s top two conferences.

Relegation is equally beneficial to franchises and fans alike. It eliminates teams from tanking. Even when they know they have no chance of making the playoffs, teams must continue to fight. They fight for their right to remain in the top two conferences because the two worse records in the AFC and NFC will be relegated to the FFC the next season. This would give the NFL a quality product throughout the year and force teams to make moves to remain competitive and winning. Put the owner’s bottom line in jeopardy and you can be assured that they will respond by doing everything in their power to field a winning squad.

Relegation would assure that the teams who really need it get the help they deserve in the draft. The Indianapolis Colts tanked the 2011 season when Peyton Manning was out for the season with an injury. They never had a viable backup in place to be able to hold things together if Manning did get injured. When they knew that Manning was out for the season, they made no attempt to bring in a quarterback that could serve as a starter in the NFL (and a retired Kerry Collins doesn’t tickle the imagination).

They knew that if they lost big that it would put them in a position to draft Andrew Luck and they would have Peyton Manning’s successor. By doing that, they wasted a year of the careers of the other players on the roster to serve their future need. It also gave them the power to push aside a legend like Manning and unceremoniously fire head coach Jim Caldwell and general manager Chris Polian. They could have traded that pick and used the multitude of picks received to continue to put pieces around Manning.

The threat of relegation would have allowed Andrew Luck to go to a team that really needed him like the Cleveland Browns. Instead, a team that didn’t need a quarterback was gifted another franchise quarterback and a legend was forced to go elsewhere to continue his legendary career. If the Colts had put together a tank job like they did in 2011 they would have been relegated to the FFC. Is a number one overall pick worth spending a year or more in a sub conference, even if that pick is Andrew Luck?

Now I won’t profess to know all of the monetary implications of things but, I know that 12-16 more teams would mean 12-16 more stadiums with fans in them. It would mean an opportunity for another television rights contract. It would mean more advertising dollars and more revenue streams.

More importantly, we would never have to hear the radio debates that permeate cities of unsuccessful teams throughout the US. “Should we tank to build for the future?”