Warning: Use of undefined constant get_magic_quotes_gpc - assumed 'get_magic_quotes_gpc' (this will throw an Error in a future version of PHP) in /nfs/c02/h03/mnt/16851/domains/footballgameplan.com/html/wp-content/plugins/cforms/lib_functions.php on line 360
 FBGP’s 1st & Forever – Preseason Receiver Races Still Comes Down to an Arms Race | FOOTBALL GAMEPLAN
FOOTBALL GAMEPLAN
Login | Register
follow us:

Preseason Receiver Races Still Comes Down to an Arms Race 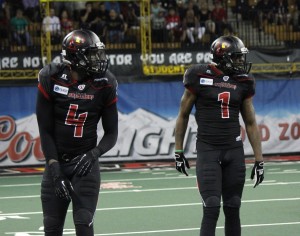 receiver. While viewing the Arena Football League’s Eastern Conference Championship, you could watch two NFL caliber receivers playing for the Orlando Predators in Greg Carr and Larry Brackins. It’s very likely that the reason they are not on an NFL roster has nothing to do with their abilities, but more with the person charged with getting them the ball.

If you are an NFL receiver trying to make a team, there are two absolutes if you want to stick on a squad; the first is playing time, the second, and maybe even more important, is an accurate quarterback. It does not matter how technically proficient you are at the position, your ability to stretch the field means nothing. You can have the best hands in the business but if the quarterback throwing you the ball does not have the ability to get you the ball, you will never show enough to make a team. 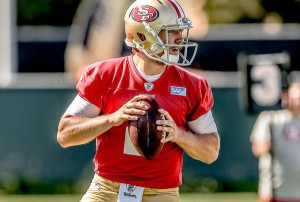 In the 49ers/Ravens preseason game this past Thursday Anquan Boldin played sparingly while Michael Crabtree and Brandon Lloyd were given the night off. For a receiver hoping to make the team, this first preseason game could have served as their best opportunity to show what they could do ‘in-game’. San Francisco is known primarily as a run-first team, which means not as many opportunities for hopeful pass catchers. Colin Kaepernick only attempted one pass before he turned the offense over to the backup quarterbacks.

This is when who’s throwing you the ball really matters. Former Jacksonville Jaguars flame out, Blaine Gabbert, was looking to take his first step in career rehabilitation and unfortunately continued to play like he did when he was with the Jaguars. By the time he was finished for the day, Gabbert only completed three of 11 passes for 20 yards. He was also sacked one time. That means there were nine lost opportunities for receivers to impress coaches and fans. Josh Johnson replaced Gabbert and completed six of eight attempts for 63 yards and one sack which meant, when he entered the game, he was able to double the completions and triple the yardage of Gabbert. 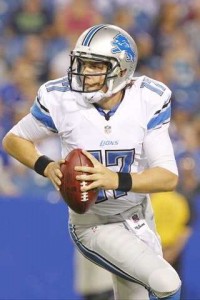 While most viewers watched Johnny Manziel look spectacularly ordinary, the other side featured a far more compelling quarterback competition. The Detroit Lions Dan Orlovsky and Kellen Moore were battling to backup Matt Stafford. It’s a competition that I’m sure their receivers should be over. Orlovsky was wildly inconsistent completing only 12 of 23 attempts for less than 100 yards. When Moore came in, he immediately reminded you why he was so successful at Boise State. He was poised and in command which allowed him to complete 11 of 13 passes for 121 yards and a touchdown. That means Orlovsky completed only one more pass on 10 extra attempts.

Receiver is the only position in the NFL that is predicated on how well another person plays. The best receivers in the league will put up pedestrian numbers when they have pedestrian quarterbacks throwing to them. So when you are looking at your team’s receiver competition pay close attention to the person throwing them the ball. It will make all of the difference.