You should be thankful you are not a member of the college football selection committee because this is the week that things will get real. They have a tough task ahead and they may have made their own job more difficult.

If you ask most of the experts, the reign of the Mississippi State Bulldogs as the number one team in the nation will end this weekend when they face the fifth ranked Alabama Crimson Tide in Tuscaloosa. If that prediction comes true, many believe that the rankings will be shaken up, but that couldn’t be further from the truth. There’s a chance that the changes in the top four could be as simple as one team moving out and the next moving in.

Unfortunately, for the college football selection committee this is finally the week where their consistency will be put to the test. With the release of their first rankings, they set the precedent for not overreacting to “good losses” they ranked Ole Miss and Auburn in the top four despite having recent losses. They realized that any SEC West team would have a near impossible time making it unblemished through their conference schedule.

They have been reluctant to move Alabama back into the top four and many outsiders believe that they did it because they knew the “Tide” could win their way back in. If Mississippi State loses their first game of the year to a top five team on the road, how will they be able to justify not giving them the same respect they showed Auburn and Ole Miss?

For that reason, if the Bulldogs lose on Saturday, they will still be a top four team. The 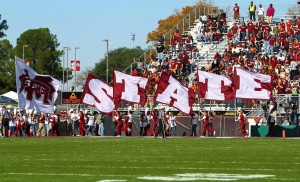 only reasonable drop for the number one team in the nation is to number four, especially in lieu of the opponent. If this comes to fruition, then either TCU or FSU (as long as they both win) will drop out of the top four. If TCU drops out then it will show that the selection committee doesn’t respect the BIG 12 as much as the SEC West. If FSU is dropped, it will show that the committee cares more about the way you win, rather than simply winning. They’ve already started down that road by allowing a one-loss Oregon team to leap over the Seminoles because their undefeated record has not been as impressive this season as it was last season.

The reverberations of these actions are why you see teams beginning to ‘run up the score’ again and throwing sportsmanship out the window. It will not only be important to win, but to win by a substantial margin to impress the committee. This has prompted Florida State head coach Jimbo Fisher to state that he would not compromise his beliefs in order to placate the selection committee. “I’m hoping to hold the integrity of the game higher than everybody else. If people on the committee can’t see that, then that’s it. We’ll play the game the way it’s supposed to be played.” 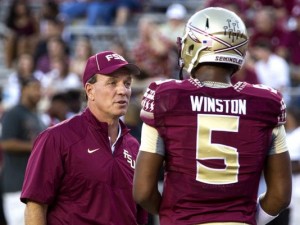 Because the BCS was formed to take a lot of the human bias out of selection, teams were more inclined to put the backups in and/or turn off the pressure in a lopsided game because the computers didn’t consider margin of victory. Over the years this has allowed teams to keep their starters fresher, and give their backups more experience in game.

The earlier actions of the committee may have backed them into a corner. If Alabama beats the Bulldogs, and the other three top four teams win, they are going to make a decision that they won’t be able to explain away with metrics or by their previous actions. The amount of scrutiny and second guessing in the air would be palpable. It’s when we will find out if public perception has the power to sway the thoughts of the committee.

Say what you want about the BCS, but their computers couldn’t read the negative feedback received from their decisions. That’s the beauty of impartiality and anonymity. It’s something the selection committee will find out about 10 minutes after their rankings are released on Tuesday.