Why are NFL teams so hesitant to make the quarterbacks they drafted earn their money? We have always known that the NFL stands for “not for long.” The NFL has grown a reputation for their ability to keep player cost down with contracts that are not guaranteed. This has allowed them to play “chicken” with almost every position player in the league. 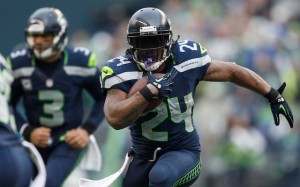 Despite teams making money hand over fist while keeping their players proportionately poorer, they constantly spend money on unproven, questionable quarterbacks. While running backs like Marshawn Lynch struggle to be paid their true worth, quarterbacks are constantly overpaid even if their performance doesn’t warrant their contract.

While Lynch has constantly produced pro bowl numbers each year, he is not paid at his value. In fact, many expect Lynch to be, but at the end of the year. His cap number will be too high and the Seahawks will have to pay quarterback Russell Wilson over 100 million dollars; which means many of the glue guys for Seattle may find themselves on the trade block or outright cut like Lynch.

This is in stark contrast to a starting quarterback who is constantly re-signed before he is a free agent. Just recently, Jay Cutler, Colin Kaepernick, Andy Dalton, and Alex Smith all signed contract extensions before they reached free agency. All four have big questions about their abilities as quarterbacks but were still given deals that put them in the conversation with the elite level of quarterback. Many could argue that these guys should have been allowed to play out their final season before a decision was made on their future, but that’s not how the league works.

Jay Cutler has rarely ever seen the postseason. There have been questions about his ability to get his team over the hump and his performances in the clutch. Colin Kaepernick has seen the postseason but many believe that he is limited in his ability to read and decipher defenses. He has also been ridiculed for how he carries himself off the field with his various tattoos and backwards caps. Andy Dalton has been a lock to blow up in the postseason every season. That is a complete 180 to his regular season performance where his stats are comparable to Peyton Manning in the beginning of his career.

But the biggest head scratcher is Alex Smith. His career was horrible to mediocre for the 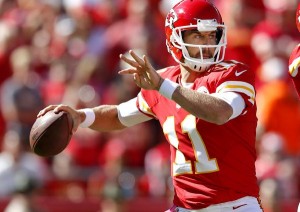 first five seasons which resulted in the career beheading of two coaches.  He was okay to good for three years and lost his job to a second year scrambler from Nevada. Yet, the Chiefs felt enough confidence in Smith, who has had more bad than good days in the NFL, to gift him a four year 68 Million dollar deal.

There are very few elite level quarterbacks in the National Football League. The saying use to go, “If you don’t have one you are looking for one.” Now it seems that if you don’t have one, you try to make people believe you have one. The problem is that people have eyes. You are not going to convince them that these quarterbacks didn’t need to prove their worth while you spent the money on other parts of your football team.