Russell Wilson is What People Wanted Vick to Be 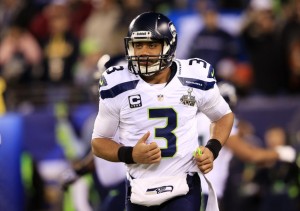 Russell Wilson has entrenched himself as the front man in Seattle for the Seahawks. He has become a media darling because he always seems to know exactly what to say and do off the field and he has backed that up with spectacular play on it. Wilson’s ability to extend plays with his feet, by avoiding oncoming rushers, forces opposing defensive backs to cover longer than they are comfortable with. When he decides to tuck it he becomes downright scary because his athleticism allows him to pick up first downs and touchdowns. He doesn’t overwhelm you with his passing numbers but he can always be counted on for accurate passing and timely big plays through the air.

The interesting part is that we have seen this show before to an extent. In Wilson’s first season as a starter, he amassed just over 3600 yards of total offense and 30 total touchdowns. Those numbers are very similar to Michael Vick’s first year numbers as a starter in 2002 for the Atlanta Falcons. That year Vick accumulated just over 3700 total yards and 24 total touchdowns.

Vick was and still is an urban icon. When he was taken first overall out of Virginia Tech 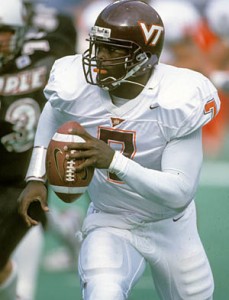 he was an immediate sensation. The “hood” loved him immediately and marketers saw dollar signs when they looked at him. It wasn’t long before brands like Nike and Gatorade, companies with urban appeal, entered into endorsement deals with Vick. Yet some worried that his image was too hip-hop, too streets, too urban. So the other endorsements never came for Vick. Quietly and publicly many hoped that Vick would clean up his image and appeal to a more broad audience off the field.

Wilson is a suburban icon. His exploits on the field give him credibility in the barbershop and on Fifth Avenue. Because his appeal is more mainstream he is able to attract endorsement dollars from every angle. Marketability is high with Wilson because of his squeaky clean image; an image that has been able to absorb a divorce from his wife with little to no National attention. He has been referred to as a sure bet and a safe bet.

Hall of Fame quarterback Steve Young once said that if Vick set his mind to hit. He could revolutionize the way the quarterback position was played. The knock on Vick has always been his work ethic or lack of work ethic. He even admitted that he relied entirely too much on his God-given abilities during his Atlanta years when he was the most exciting player in the NFL. He had trouble reading defenses and also had accuracy issues. Those are two big things that could be corrected with proper study and harder work on the practice field. 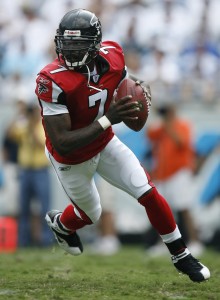 Steve Young was not wrong. Vick has revolutionized the game. If you look around the league there are only a handful of quarterbacks getting the job done strictly through their ability to operate in the pocket. Quarterbacks today are combining a pocket presence with the ability to escape. No quarterback exhibits the pocket awareness mixed with the dynamics of a runner quite like Wilson. In addition, he is a student of the game and is constantly looking to improve himself as a quarterback. He is accurate with his passes and reads coverage like a ten-year veteran.

Vick stayed banged up in college and that propensity for being hurt would follow him to the NFL. Many believed that the reckless abandon he played with would keep him off the field more than on it and again they were right. He took shots in and out the pocket and because he was a runner he was never protected the same way that manning or Brady was. There were constant conversations and debates on how he needed to learn to protect himself better at just over six feet tall.

Wilson has never had a problem protecting his body from car crash-like collisions. At 5’11” Wilson is similar in build to Vick. He has had the chance to see the punishment Vick has taken over the years. His years as a baseball player has made it comfortable for him to slide and avoid shots and he also runs with the purpose of keeping the drive alive instead of scoring.

Professional football player is just like any other profession, the more you learn in school 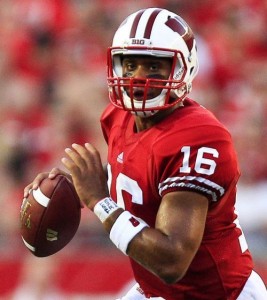 the better you are. Vick spent as little time at Virginia Tech as possible. He opted to go to the draft immediately, and of course that was a great decision because he was the #1 overall pick but he missed out on two more seasons of making himself the best quarterback he could be. In the NFL, Vick has never had a stable coaching situation. Dan Reeves, Jim Mora Jr., Bobby Petrino, Andy Reid, Chip Kelly, and now Rex Ryan. Those have come with more offenses and philosophies for Vick to count than one could count.

Wilson stayed in college and exhausted his learning there before he came to the NFL. He played in two pro style offenses while attending NC State and Wisconsin. When he entered the NFL he hit the ground running and was fortunate to come in to a professional ball club with a fresh innovative coaching staff. That staff provided Wilson with the support to be himself while doing what they need to do to win.

Early on analysts though that if Vick had a little less speed and arm strength that he would have to focus on how to make himself a better deliverer of the ball.

Well, what is Russell Wilson essentially?