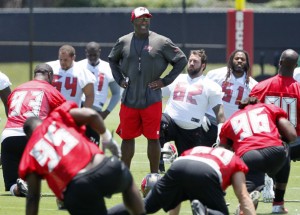 When Lovie Smith took over as head coach and de facto decision maker on personnel of the Tampa Bay Buccaneers, he, along with general manager Jason Licht, decided that priority one was to improve the offensive line. They said goodbye to veteran Bucs Donald Penn, Jeremy Zuttah, and Davin Joseph. They also parted ways with disappointing free agent guard Carl Nicks and starting guard Ted Larsen. They were going to focus their attention on upgrading what they had assessed as a big need for improvement.

The Bucs went out and lured in Anthony Collins and Evan Dietrich-Smith in free agency and after a preseason that showed there were significant problems with their interior guard play they traded for long time New England Patriot Logan Mankins. When the smoke cleared and the Bucs were ready to open the season their line looked more like a patchwork job than a cohesive unit and it showed in the first quarter of the season. The Buccaneers signal callers have been under siege and running backs have not found anything that resembles consistent running lanes.

The jury is still out on the Bucs newly constructed offensive line. It makes you wonder if 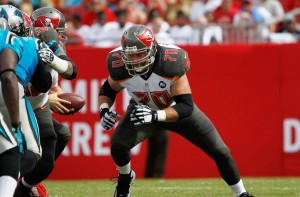 they would not have been better off restructuring the contracts of the old linemen and taking another shot at things. The four players that Tampa Bay deemed not worth of starting for them were quickly scooped up by other teams and are now starting.

Davin Joseph, now two years removed from knee surgery and a staph infection, has returned to Pro Bowl form with the St. Louis Rams. He is once again a dominant run blocker and solid pass blocker from his right guard position. Joseph proved to be a great signing for the Rams and was instrumental in the victory over the Bucs protecting a third string quarterback.

Jeremy Zuttah joined the Baltimore Ravens and has helped to return their running game to prominence. His versatility is also recognized and used by the Ravens. He currently serves as the starting center but he also has the ability to play almost any position on the line.

Ted Larsen has helped solidify an up and coming offense with the Arizona Cardinals. The left guard has given Arizona head coach Bruce Arians a hard nose blue collar guard to remind him of his Steelers days. The Cardinals offense has been dynamic and they are 3-0 coming out of a week 4 bye.

Donald Penn is the starting left tackle for the Oakland Raiders and while the team has started off 0-4 he has been solid at his position. 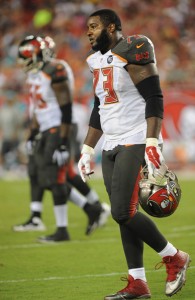 Could the Buccaneers have saved themselves a lot of time and money by restructuring deals with these four guys or at least the interior linemen? They could have taken more continuity on the line into the season and still added Anthony Collins if they truly feel that he is an upgrade over Penn.

As of right now the entire offensive line situation seems like change for the sake of change and has not produced more desirable results. After the victory over Pittsburgh, many want to point the blame to the quarterback position. They use the excuse that Mike Glennon gets the ball out of his hands faster than Josh McCown. Remember that Glennon was the quarterback of the 32nd ranked offense in the league last season.

Let’s hope this line is improved or this offense could be looking at that dubious distinction again this season.