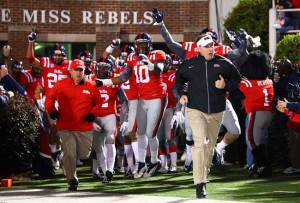 The state of Mississippi is flying high after last weekend. Mississippi State moved their record to 5-0 with a convincing win over Texas A&M and Ole Miss followed suit by upsetting Alabama. Both teams find themselves ranked third in the nation depending on what publication you follow. That’s rarified air for the state of Mississippi and it makes you wonder exactly how long they can stay that high.

The SEC, especially the SEC West, is a marathon not a sprint. It’s not won in a week but won, one week at a time. You can never get too high or too low because the one thing you can guarantee, especially now that the two Mississippi teams are good, is that the team you face next week will be a quality opponent. Both teams will find that out this weekend when they return to action.

Ole Miss has been on cloud nine since defeating Alabama. The Rebel fans rushed the field last week and tore the goal post down. The players had to get back to work on Tuesday and while receiving pats on the back and kudos for a job well done, they must prepare for a desperate Texas A&M squad. The Aggies, who are coming off a loss to Mississippi State, understand that two losses in their division will most likely put them on the outside looking in come SEC championship time. If Ole Miss wants to be taken seriously they must follow up the epic win over Bama with another win. If they allow the glow of the Bama victory to blind them from their ultimate goal, they could fall to a good Aggies squad. 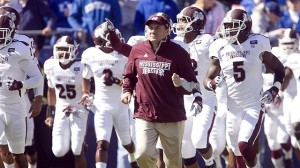 they didn’t rush the field because they knew that their next test would be even tougher as they welcome Auburn who is currently ranked second in the nation. The Tigers were just in the national championship game last season so they know what playing in big games are like. This might be the biggest game in Bulldog history. Even if they find a way to win a game they will definitely be the underdog in, they will still have to navigate through games against an Improved Kentucky squad and SEC West foes, Arkansas, Alabama, and of course interstate rival Ole Miss.

The road to utopia in Mississippi is clear to see, but that road is full of dangers and perils. There is no guarantee both, or even one of the two Mississippi universities will get through the season unblemished. This season can really be an opportunity for these programs to build their profile up beyond one year and become a regular factor in the SEC West. The season can have an extremely positive effect on their recruiting and fundraising. Will Mississippi become football heaven? Can they run the table or even get into the playoffs this year? Are they one year away? Are they one-year wonders? 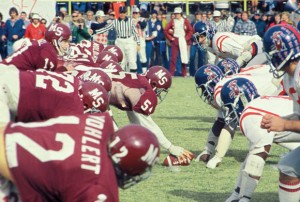 There are definitely more questions than answers right now and that’s okay because the answers will come by continuing to win. Winning is the ultimate equalizer. It will be interesting to see how winning will affect these two Mississippi universities. Will it motivate them to continue to strive for more or will it pacify them? Or are they just happy to get here in time to be considered as a prospect?