Warning: Use of undefined constant get_magic_quotes_gpc - assumed 'get_magic_quotes_gpc' (this will throw an Error in a future version of PHP) in /nfs/c02/h03/mnt/16851/domains/footballgameplan.com/html/wp-content/plugins/cforms/lib_functions.php on line 360
 Football Gameplan’s Campus Kickoff – Let’s Be Real About Kansas State | FOOTBALL GAMEPLAN
FOOTBALL GAMEPLAN
Login | Register
follow us:

Let’s Be Real About K-State

Listen to any college football talk show, to any analysis and breakdown of teams with a 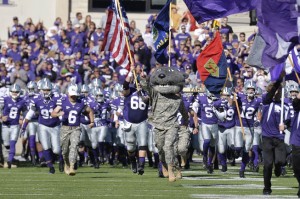 chance to appear in the college football playoff and you will hear the name Kansas State. These analysts say things like “Kansas State should have more respect nationally” or “Watch out for Kansas State” but the truth is why? Why should we? What have they ever done to make us believe they are legitimately a national title contender?

This is going to come off as disrespecting Kansas State, and that’s fine if people want to grab at low hanging fruit, but truthfully it’s not. They should be commended for the way they keep themselves competitive. It’s hard for any program when they have to heavily populate their roster with junior college transfers and elite-level program cast offs. When you compare that to Kansas University and their inability to put a quality program on the field, you are even more impressed by what Kansas State has done. However, when “experts” defend your right to be a top 4 team by citing a close loss to a top program the argument falls flat on its face.

Let’s look at the two biggest reasons the arguments for K-State just don’t hold much water.

1. Their schedule’s not that great. 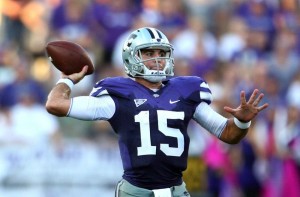 Auburn is the best game and they lost. Before someone says that they played them tough, understand that there have been a few teams that have played Auburn tough and throughout the years, top teams have been tested by teams they are better than. The object is to win, they didn’t, and they were at home.

Oklahoma was a good win but it could have easily been another good loss. The problem with taking credit for a good loss is that you have to take criticism for a close win. Many still believe they Oklahoma is a better football team than K-State.

While the Auburn loss was considered a “good loss” the Iowa State win has to be a “bad win.” When you barely beat a team who routinely loses to FCS opponents, how can you stake a claim to be one of the best teams in the nation? Kansas State could have easily lost that game and if they did, we would consider them just another bad team in the Big 12.

K-State’s other opponents are teams that are not only unranked but are nowhere near the upper echelon of college football.

2. They don’t pass the eyeball test.

Name a player on the Kansas State roster. In fact, other than Collin Klein name any player 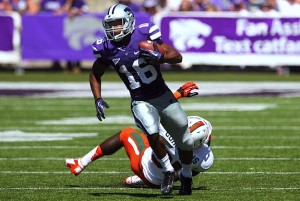 on the Kansas State roster in the last three years. In those three years Arthur Brown was the highest NFL draft pick for the Wildcats as a second round pick. Overall they have only had six players drafted in that time.

Their offense doesn’t scare you. There are no backs that put fear in your heart. The quarterback doesn’t seem to have the ability to win the game on his own. Their receiving Corp and offensive line are nondescript. The defense is essentially the same. K-State reminds you of the movie where a bunch of discarded rag tag players come together to form a champion. The problem is that in the real world those teams are nice stories but never win it all.

That’s what K State is. They are very nice story, of a nice teen, with a nice coach, but they’re not nearly the best team in the nation. On a neutral site with the chips on the line you can’t have faith that Kansas State is going to pull off a win against one of the top teams in the nation.