Warning: Use of undefined constant get_magic_quotes_gpc - assumed 'get_magic_quotes_gpc' (this will throw an Error in a future version of PHP) in /nfs/c02/h03/mnt/16851/domains/footballgameplan.com/html/wp-content/plugins/cforms/lib_functions.php on line 360
 Football Gameplan’s Campus Kickoff – The Perfect Fit | FOOTBALL GAMEPLAN
FOOTBALL GAMEPLAN
Login | Register
follow us: 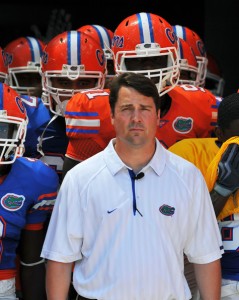 Despite the results of their game versus the University of Georgia, it seems safe to say that, barring a miracle, University of Florida head football coach Will Muschamp has had an unsuccessful tenure at the helm of the Gators. This season is the culmination of ineptitude on the offensive side of the ball. The Gators no longer resemble the high-flying, high powered, offensive juggernaut that brought two national championships to Gainesville.

The one thing that has remained consistent at the University of Florida is its defense. Muschamp came to Gainesville known as a great defensive coach and in his time with the Gators, he has done nothing to change that perception. Florida’s defense had been one of the tops in the nation since Muschamp’s arrival. While he continues to miss the mark on the offensive side and picking offensive coordinators, he continually hits on stellar defensive recruits, and he knows how to use them correctly.

When he is relieved of his duties as head coach, he will certainly have an opportunity to take the reins at a lower level university. He could also take a break from coaching and be an analyst on some Saturday morning college football show. What he should do is go back to doing what he does best; coaching defense.

He should look no further than Gator rival Florida State as a perfect landing spot!

Florida State has enjoyed success throughout the Jimbo Fisher era. They are currently on a 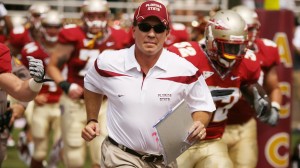 historic run that has yielded one national championship, one Heisman Trophy winner, and currently in position to make a run at a second consecutive undefeated season and national crown.

While the Florida State defense has been scary good over the past several seasons, this year the defense has looked pedestrian. As they break in more inexperienced players and their third defensive coordinator in three seasons, the quality of play on the defensive side of the ball has waned.

Over the past two seasons, Florida State has watched eleven defensive starters be snatched up in the NFL draft. They also watched their first defensive coordinator under Jimbo Fisher, Mike Stoops, become the head football coach at the University of Kentucky. The second defensive coordinator, Jeremy Pruitt, left to take the same position at Georgia after only one season on the job with the Seminoles.

Current FSU defensive coordinator Charles Kelly has not been able to produce the consistency and dominance that the past two coordinators have. It could simply be a result of players not maturing as quickly as they’d like or it could be that while Kelly is a fine coach, he just needs now time to find the right formula for this current Seminole defense. Either way it seems that as of right now, if the Seminoles do not repeat, it will be a direct result of an under-performing defense. 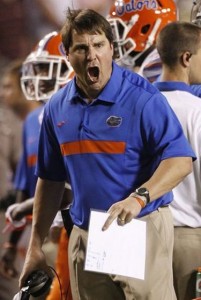 What Muschamp would bring is another respected mind on the defensive side of the ball. It would allow Kelly to focus strictly on defensive backs, while Muschamp devised the game plan to allow the Seminoles to take advantage of their vast amount of defensive talent. If the many reports that this will be Jameis Winston’s final season in Tallahassee are true, the defense will need to be greatly improved as Jimbo Fisher breaks in a new quarterback.

What makes this an easy transition, is that Fisher and Muschamp have a great relationship. They even own a beach house together, which they purchased together when they were both on the staff at LSU under Nick Saban. They have remained good friends and Muschamp would satisfy everything that Fisher would want in a defensive coordinator. It would also give Muschamp the opportunity to rehabilitate his career and eventually take another chance at being a head coach at a premier university.

Gators fans would hate it, which would be another reason that it would be great move for the Seminoles. They should even consider bringing him on immediately following their rivalry game to help them prepare for the college football playoff.

It’s an out-of-the-box move, but if Fisher is dedicated to continuing to improve his team, he can’t be naive enough to think that the answers will always come from within.