Warning: Use of undefined constant get_magic_quotes_gpc - assumed 'get_magic_quotes_gpc' (this will throw an Error in a future version of PHP) in /nfs/c02/h03/mnt/16851/domains/footballgameplan.com/html/wp-content/plugins/cforms/lib_functions.php on line 360
 Football Gameplan’s Campus Kickoff – The Suicide of Michigan Football | FOOTBALL GAMEPLAN
FOOTBALL GAMEPLAN
Login | Register
follow us:

The Suicide of Michigan Football

The top definition of suicide is intentionally taking one’s own life and the second definition is the destruction of one’s own interests or prospects. Both seem to apply to the situation at the University of Michigan and its once proud football program.

In any potential suicidal case, one should look for a traumatic event or events that may cause someone to consider suicide. 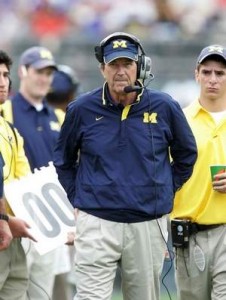 For Michigan football that is easy to identify. Long time Michigan head coach Lloyd Carr announced his retirement on Nov. 19th 2006 amidst talk that the offensive innovation had fallen on hard times. Although Carr had amassed a 121-40 record over his 12 seasons in Ann Arbor, his losing record (6-7) versus Ohio State was a big reason for him finally retiring from his post. Of course Michigan brass believed that the prestige of their program would net them whomever they wanted to take over the program. After all, they have the notoriety, educational clout, facilities, and they recruited nationally, so who wouldn’t want to coach the maize and blue.

Michigan first reached out to a “Michigan Man” in Les Miles but he turned them down. He was fighting for a national title that season and he realized the recruiting jewel he had in LSU. They did not reportedly reach out to a fellow “Michigan Man” in Jim Harbaugh who was finishing up another great season at San Diego and Stanford University swooped in and scooped him up in December of 2006. They then turned their attention to a “Michigan-Like” coach in Greg Schiano, who was the head coach at Rutgers at the time, but they were again turned down. The realization that they couldn’t have anyone in America quickly set in and made this changing of the guard even more dramatic.

Behavior changing 180 degrees can be a sign that something is not okay.

After waiting until it was almost national signing day, the Wolverines finally tabbed Rich 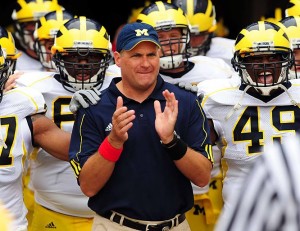 Rodriguez as its new head football coach. They were able to wrestle him away from West Virginia where he had turned a fledgling program into a Big East and national power. Rodriguez definitely signaled a new day at Michigan because he was a far cry from what a “Michigan Man” looked like. He spoke with a twang and ran different innovative offenses and defenses. He conducted practices differently than the conventional football program and had his own unique ideas about creating excitement again in Ann Arbor. Most importantly, he was looking to recruit different types of players to run his philosophy.

The good thing is that when given time, Rodriguez had been successful everywhere he landed which included Glenville State, Tulane, Clemson, and West Virginia. He was hoping that the change could be quick and it would have been if they landed the nation’s top recruit quarterback Terrelle Pryor whom he was recruiting at West Virginia and was now deciding between Michigan and rival Ohio State. Rodriguez lost his first battle against the Buckeyes when Pryor picked Columbus over Ann Arbor. This was another reason for despair at Michigan and was ultimately the reason Rodriguez didn’t succeed.

Rich Rod went into his first season with very few of his own recruits because of how late he received the job. His first season was terrible at 2-9, the worse in school history. His second season they were 5-7, but by his third campaign they were 7-5 and bowl eligible. He had recruited players that valued his philosophies and believed in his schemes and practices. He had recruited a dynamic quarterback in Denard Robinson who had two seasons remaining and another one the way in Devin Gardner. He also boasted several players who would go on to be NFL draft picks and extremely effective players at Michigan. Unfortunately after that season Rodriguez was fired.

When Michigan fired Rodriguez they essentially committed program suicide. They went away from what makes any program successful, consistency.

It took Rodriguez three seasons to get the type of players he needed to run his system and once he had them, he was fired; not allowed to see what he could do in year four with his players in place. Because they had not achieved at a high level, it meant that any elite level coach was out of the question. College football’s elite would not want to come in and clean up that mess. Michigan was again shunned by Les Miles and this time they reached out to Jim Harbaugh but he chose the NFL instead. 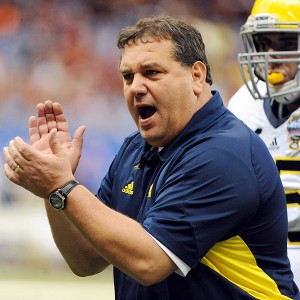 This time Michigan, determined to employ a Michigan man reached out to former assistant Brady Hoke, who was the head coach at San Diego State. Hoke and Michigan brass wanted to return Michigan to its original roots which meant once again the program had to go through a 180 degree change. Hoke did a smart thing and won big in his first year essentially running a Rodriguez-style offense and leaning on Junior stud Robinson at quarterback. But his inability to recruit at the level of other top quality head coaches, and trying to return Michigan to a traditional style of play, has caused the program to slip back down into mediocrity. The man Jason Whitlock referred to as; “The perfect coach for Michigan” just can not get it done at Michigan.

Now Michigan, like the entire Big 10, is flat-lining in irrelevance and there does not seem to be any chance of resuscitation. Did I mention they just lost to Notre Dame 31-0?

Time of death, Saturday September 6th 2014 at approximately 11:30 pm. It was a good run Wolverines.