We reach the penultimate spot in our Tight End Confidential series, and find a tight end corps responsible for helping their team get to the Super Bowl last season, the Carolina Panthers. 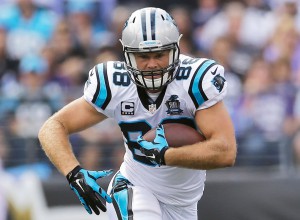 The Panthers tight end unit begins with the fantastic play of University of Miami alum Greg Olsen. Since arriving in Carolina, he teamed with reigning NFL MVP Cam Newton has lit up the league. Olsen logged another 1000-yard season and cemented himself as the second best tight end in the league. Olsen has proven his value as a pass catcher and his prowess as a blocker in the run game is highly underrated. He has also been instrumental in one of the best rushing attacks in the NFL. Newton is continuing to improve, and with Kelvin Benjamin returning from injury this season, it will be extremely difficult to keep Olsen away from another 1000-yard season.

The number two guy for the Panthers is an end who has the ability to start and be a playmaker for any squad but is a great teammate who accepts his role in the offense. Ed Dickson joined the Panthers from Baltimore two years ago and he’s been a great compliment to Olsen and a very valuable asset in the run game.

The beauty of the Panthers tight end corps is that have adopted the carbon copy approach, as all of their ends have similar builds and skill sets. That allows them to interchange seamlessly and if someone is injured, they are able to fill in without changing the gameplan. Most teams have various types of ends. They have a guy who is valuable as a run blocker, but doesn’t offer much in the pass game, and they also have pass catchers that don’t have the ability to block in the run game effectively. This makes these teams much easier to game plan for because their personnel dictates what they are doing.

Both Olsen and Dickson are complete ends who stand around 6’5 and 250lbs. Braxton Deavers, Marcus Lucas, Beau Sandland, Scott Simonson are also all in that same physical mold. Those four guys will be battling it out for two spots most likely so that battle in camp will be fun to watch. All four have the ability to be effective for the Panthers offense, but with the quality and relative health of Olsen and Dickson, there may not be many snaps for anyone else but the other four will be counted on to make their mark on special teams.

The Carolina offense was spectacular last season despite dealing with injury and shaky offensive line play. They are hoping to have a much healthier team and improvement from every position, tight ends included. If that happens, Panthers nation should be overjoyed and looking forward to another great season much of that will be a product of the number two tight end group in the NFL.