Our final team, and #1 ranked unit in our Tight End Confidential series, should not be surprising to anyone. The New England Patriots not only possess the most dominant non-quarterback in the NFL at tight end, but in the offseason they added another top ten tight end, and one of the most effective H-backs in the league. 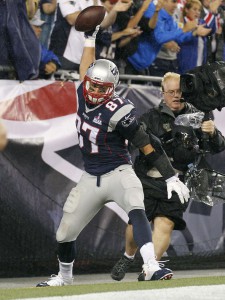 When you talk tight ends in the NFL for the past six years Rob Gronkowski has been the gold standard. He arrived on the scene in 2010 with ten touchdowns and followed it up in 2011 with a staggering 17 touchdowns. His effectiveness is partly the product of his size, 6’6” 265 lbs, and athleticism. The other part is that he is the epitome of a complete tight end. He is just as effective as a blocker in the run game. You can routinely see him collapsing ends or kicking out, and drive blocking linebackers. He’s a match-up nightmare for defenses. He’s far too big and strong for the average defensive back to guard, and he’s too athletic and agile for linebackers and safeties. Every team in the NFL is looking for a Rob Gronkowski, which has increased the value of tight ends coming out of college. Over 1,000 yards and double digit touchdowns has become the norm for Gronk, who many believe is already the best tight end ever.

In addition to Gronkowski, the Patriots added the ultra talented and enigmatic former Chicago Bear Martellus Bennett. Bennett is just one year removed from his best season ever when he amassed 90 receptions, over 900 yards and six touchdowns. Now as the number two guy, Bennett will have the benefit of not being the major focus of a defense and having Tom Brady throwing him balls won’t hurt as well. Bennett provides the Patriots with two bonafide, complete tight ends that are both similar in stature and athleticism. It gives them the ability to run two-tight sets without giving away anything in the pass game. They both can be split out or perform just as effectively inline.

Gronk and Bennett are enough to make the Patriots the number one unit but, to add the cherry on top is H-back specialist Clay Harbor. Harbor will be entering his seventh season in the NFL. He spent his first three with the Philadelphia Eagles and the past three with the Jacksonville Jaguars. Prior to last season, the 6’3” 240 pound receiving end had his most productive three year stretch where he amassed 75 receptions and over 750 yards. Impressive numbers for a guy who has been the third option at tight end. His versatility has made him effective and allowed him to earn his way on the field. He has been successful in different offenses and he will definitely have an opportunity to shine in a Patriots offense that really favors the tight end. You can see him full a role very similar to how Aaron Hernandez was used.

This three-headed monster is the scariest in football and will keep defensive coordinators up all night. There is no better safety blanket to have for an inexperienced quarterback, and no better weapons to take advantage of if you are a veteran, than a good tight end. The Patriots will deal with the Tom Brady suspension just fine.