Warning: Use of undefined constant get_magic_quotes_gpc - assumed 'get_magic_quotes_gpc' (this will throw an Error in a future version of PHP) in /nfs/c02/h03/mnt/16851/domains/footballgameplan.com/html/wp-content/plugins/cforms/lib_functions.php on line 360
 Prospects to Watch: FSU vs USF – Bulls Prospects | FOOTBALL GAMEPLAN
FOOTBALL GAMEPLAN
Login | Register
follow us:

Flowers has shown big play ability with his arm and his legs. He’s improved his release, velocity, touch, and accuracy on his throws and has the ability to extend the play. When he breaks the pocket he is even more dangerous and throws well on the run. He becomes a running back when he tucks it. I would still like to see more poise in the pocket and better accuracy on intermediate throws. 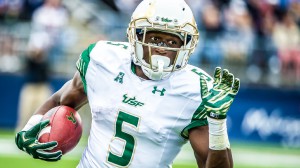 with the top backs in the country. He is big, fast, and elusive. He has excellent hands out the backfield and is a willing blocker in pass pro. I would like to see more against major competition. He will have his opportunity this season.

Adams is a legit deep threat receiver who does a great job at separating from defensive backs. He has high point ability and is a good hands catcher. He also brings value in the run game doing jet sweeps and quick screens. I would like to see him continue to shape up his route running.

Harris is your prototypical 2016 outside linebacker he is rangy with great athleticism. He is a 3-down back who can fill a gap and cover a slot when necessary. He is a sure tackler in the open field and brings the aggressiveness necessary to play the position. I would like to see him be a more effective blitzer but it may not be in the gameplan.

Sanchez is a tackling machine in the middle of that Bulls defense. He had good lateral quickness and he attacks open gaps well. He fights off blocks well and he has a good feel for when to slip would be blockers to get to a ball carrier. He has improved his blitzing and it has been paying dividend early this season. I would like to see him more effective in pass coverage.

Godwin is athletic and aggressive. He had started an abundance of games for USF so he is very experienced and knowledgeable in the defense. He plays primarily at the second level and is a great tackler sometimes doubling as a linebacker. He is good is slot defense and man coverage. I would like to see him make more plays on the ball. He has a decent number of passes defensed but only 1int in his career at USF.