It’s going to be hard for Buccaneers Head Coach Dirk Koetter to say he doesn’t need a guy with the skill set of Bernard Reedy.

A popular phrase for the Bucs a few years ago was “speed in space,”and now Koetter’s “Playmakers in space.” Well they possessed none of that last season. In fact, their receiving corp is made up of primarily big, strong guys with good straight line speed and high-point ability thanks to a large catch radius. 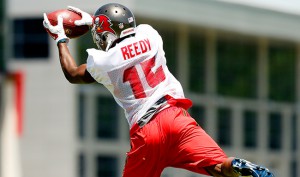 Reedy is different. He’s a prolific receiver out of Toledo with legitimate take-the-top-off speed and shiftiness in confined spaces. Most look at him as a long shot to make the team, but his performance early on in camp suggests that he is going to make that decision much more difficult than anyone not named Reedy could have imagined.

Throughout the first four days of training camp, #15 has splashed. Despite less reps, when he does get one, he’s not wasting it. You can find him on special teams returning kicks, in the slot, or out wide. Reedy talked about his versatility and willingness to do whatever it takes. “Whatever the coaches want me to do in any way; special teams, offense, even if they try to put me on defense. Any way I can help I’m with it!”

Reedy’s goal is not unrealistic. According to Koetter, he is pleased with all the receivers so far but nobody has separated. That doesn’t mean that he has not made a declaration already. Today Koetter stated, “Adam Humphries is going to be our number three!“ That announcement, mixed with Shepard who is a big special teams contributor, and an injured Louis Murphy, means there are five spots taken theoretically.

The good news for Reedy is that none of those guys are return men, and none are burners, so there is a need for the skill set he possesses. Basically, he needs to continue to splash. He has used his previous experience in Koetter’s offense to get ahead of the game. “I believe that it gives me the ups on that playbook since he was the offensive coordinator when I was there (Atlanta).”

The good news is that he will get lots of time during the preseason to work. There’s no reason to believe that Vincent Jackson and Mike Evans will play many snaps during those games. In that time Reedy will have to transfer the production he has shown in practice to the games, and there’s no reason to believe he can’t make it happen. He’s been a playmaker his entire life and his philosophy on taking advantage of limited opportunities reflects that. 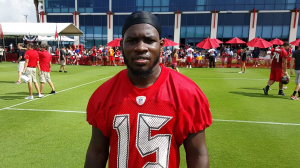 “I always come out early. I always try to be the first one out here catching extra punts, catching extra balls and just having that mentality that no matter how many reps you get, you’ve got to go out there and be the best you can be. You can’t be nobody else.”

Reedy is hoping that his best is good enough to stick on the 53-man roster.