The Logical Choice for a Position Change

The 2016 NFL draft is fast approaching and every writer, personality, and talking head are looking to find the diamond in the rough. The annual, “insert minority quarterback here” needs to change positions has already played itself out. This season it is even more ridiculous when you consider the level of success these quarterbacks have had playing the position. In addition, when you look at the combine numbers, a quarterback like Trevone Boykin would leave him as a mediocre talent at wide receiver. Why move a guy that has played quarterback at a superman-like level to a position that would reduce him to a mere Clark Kent?

Meanwhile, everyone has missed a quarterback with excellent measurables. A young man who was an elite performer at the combine athletically and who has a college career that does not give anyone reason to believe that he will be successful at quarterback in the NFL. I am talking about Louisiana Tech signal caller, and former Florida Gator, Jeff Driskel. 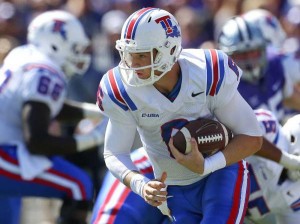 Despite a good senior season, Driskel possesses some major flaws in his game that would make it difficult to succeed in the NFL and would leave him as either a journeyman backup at best, or more likely a practice squad player.

However there is no denying Driskel’s athletic ability, size, and toughness. With that thought process, and in the spirit of moving quarterbacks to a position that they have never played at a high level, Driskel should seriously consider a move. In a draft missing elite level tight end prospects, Driskel would elevate himself to the top of the class.

Everyone’s draft evaluator’s best tight end prospect in this year’s draft is Arkansas junior Hunter Henry. While Henry is a good prospect as a pass catcher, he has a long way to go as an inline blocker. So when you look at Driskel’s transition, he would be looking at the same limitations as Henry. As an athlete there would be no denying Driskel is already better than Henry. He’s more explosive! His vertical and broad jump numbers were both better than Henry’s. Both have similar change of direction abilities posting almost identical numbers in the 3-cone drill (7.16 Henry, 7.19 Driskel). Driskel is an inch shorter but has bigger hands, longer arms and while Henry is most likely a little stronger, Driskel’s 4.56 is 1/10 of a second faster than Henry’s and over 2/10’s of a second faster than Boykin. 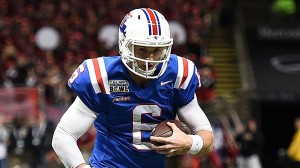 Most might question the physicality of the position and how Driskel would fair, but the one thing you can’t question about Driskel is his toughness. He took a beating while playing quarterback for the Gators and was put in a situation, because of scheme, where he was running the ball a lot. Because of his flaws at quarterback, he was getting hit repeatedly in the pocket. One would think that if you can take punishment from defenses in the SEC,  you can stand up to the rigors of the NFL.

At 6’4” 235 pounds, Driskel could be 250 lbs by the time his team opened camp. He is use to handling the ball and catching it. He knows the importance of ball security from his experience at quarterback. His time as a signal caller also means that he would have a unique understanding of what quarterbacks want him to do. He could also have no problem picking up the playbook.

So why no screams for Driskel? That’s a great question.