I have many pet peeves when it comes to the game of football. A lot of them come from your basic, tired football myths. So much so, we’ve collected 50 of the biggest myths and put them in a book entitled, “Stiff-Arming Football Myths” (which you can find here -> www.footballgameplan.com/BOOKS).

One myth in particular that I point to constantly in videos and on social media, is the ‘Size is a Skill’ myth. That myth really irks me because it leads to bad decision making by GMs and coaches, which also leads to bad analysis by media and fans alike. It’s actually the basis for this article.

Too often you’ll hear certain phrases like this when describing certain running backs of a certain size:
• “He’s a change-of-pace back”
• “He’s a satellite player”
• “…You’ve got to get him out in space”
• “He dances too much”
• “He can’t run tough between the tackles”
• “He can’t take the pounding”

Here’s what’s funny about those statements; none of them have anything to do with size!

I spoke with Bryant University’s Head Football Coach, James Perry, who was a long time offensive coordinator for the Princeton Tigers, who said “I want my best eleven on the field at all times. If 2 quarterbacks are in my best eleven, then they’ll both be on the field at the same time”. This is a great way of thinking! It’s also the right way to think. You should want your ‘best eleven’ out there on the field, regardless of size, school, pedigree or some other nonsensical reason.

Too often you see running backs not get fed the ball because of one of the aforementioned myths. So, when these underutilized playmakers DO get the opportunity to run the ball traditionally, or touch the ball for that matter, you’ll see them try to ‘make a play’. A lot of times that could work out positively, and sometimes it could have a negative effect. The mass majority tend to only focus on the negative result and ignore the potential, and eventual, big play that’ll take place. 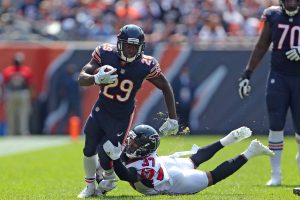 Take for instance Chicago Bears rookie running back TarikCohen. At 5’6 185lbs, Cohen is considered small by NFL standards. But, he’s strong, lighting quick and has breakaway speed. He also carried the load at North Carolina A&T in a traditional running offense where he had to utilize all of the skills necessary to be a successful back; on a team where he was THE only option and teams KNEW he was getting the ball. He still averaged over 6 yards per carry and 217 carries per season.

Yet, Cohen gets knocked, underutilized and misused because of his size.He’s forced to play 2nd fiddle to a back in Jordan Howard, who’s solid in his own right, but doesn’t have the ability to ring that cash register like Cohen does. So, while the Bears force-feed Howard the ball, Cohen has to make due with what he’s given. When you’re a playmaker, you want to make plays when given the opportunity. And when your opportunities are limited, you will try to do a bit too much to make that play.

It would be a crime if I didn’t address the “you’ve got to get him out in space” myth. Football is a game of angles. And the common misconception is that if you get one of these ‘smaller’ backs out on the perimeter, that’s where they’ll be most effective. That’s simply not true. The fastest way to get from point A to point B is straight ahead. Also, inside the box is where all of your defensive linemen and linebackers are (power) and outside of that is where your corners and safeties are (speed); why would you run your running back into an area where his advantage (speed) can be taken away by angles and faster players? It’s ideal to run these guys inside because their speed will get up on a linebacker too fast, he’ll be flat-footed and then the back can make a subtle move to the left or to the right, and then it’s off to the races.

Also, for the ‘he can’t take the pounding inside’ crowd. Speaking from experience, not 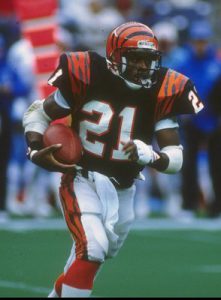 Running back James Brooks of the Cincinnati Bengals

Playmaking comes with comfort, especially at the running back position. It’s about rhythm and feel. You need both to have success. That doesn’t happen with sporadic opportunities. When you’re dealing with a playmaker, you have to be able to deal with a loss here and there. Barry Sanders is an all-time great and has the most lost yardage by any running back in NFL history.

Here are examples of players that fit this mold that wasn’t given the opportunities of ‘feature-back’ carries initially in their careers:

Here is a look at some Football Gameplan Advanced Facts for you the season these players were given starters carries:

Another back of note was Warrick Dunn who crossed the 1,000 yard mark 5 times out of 8 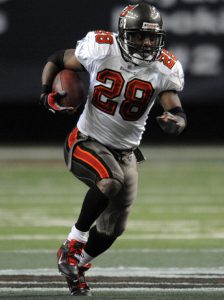 when he got over 200 carries in a season. His team-inflicted handcuff was his FB Mike Alstott who got all of the goalline carries instead of Dunn. Otherwise, his touchdown numbers would be even better. Dunn still rushed for over 10,000 yards in his career when he barely got the ball in the beginning part of his career.

It is also a crime that we, as fans of the game of football, got cheated from what could’ve been an even more spectacular career from Darren Sproles.  Sproles’ game is very similar to Tarik Cohen.  Sproles ran for nearly 2,000 yards his junior season at Kansas State, carrying the football over 307 times in a pro-style rushing attack. Yet, when he got to the NFL, he was cast immediately as a ‘space guy’. Utterly criminal!

There are some other players, that don’t play running back, but are misused as far as maximizing their abilities are concerned.

De’Anthony Thomas of the Kansas City Chiefs is of the same mold of Tarik Cohen. A super elusive running back from Oregon that has breakaway speed, was considered too small by NFL standards to be a running back and has been converted to a wide receiver. One could only imagine what he could produce in that Chiefs offense had he remained utilized as a tailback. It worked out for the Chiefs anyway as they were able to grab a homerun hitter in the draft in Kareem Hunt.

Speaking of the wide receiver position, CordarrellePatterson is the most misused and underutilized breakaway threat in the game. Because his style isn’t traditional, people miscast him as ‘just a returner’ and coaches can’t seem to figure out ‘how to get him the ball’. So, it’s not just a running back thing. The misuse of playmakers stretches across all skill positions.

So, to put a nice little bow around this lengthy rant, just play the best players and let playmakers do what playmakers do. Trust me, it’ll all work out for the better in the end.