Carolina Panthers QB Cam Newton is Due for a Contract Extension 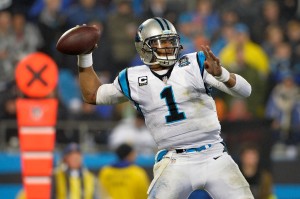 There are few players in the NFL that stir up as wide a range of evaluation as Carolina Panthers quarterback Cam Newton. Words such as dynamic, polarizing and bust where thrown at Newton when he went through the NFL Draft evaluation process back in 2011. Then 49ers head coach Jim Harbaugh was one of the few that heaped a lot of praise on Newton, calling him “plutonium-grade raw material” and said he hasn’t seen a player with upside like Newton in probably the last 10 years. At the end of the day, Newton is a player with rare ability and is possibly one of the most talented quarterbacks in the NFL.

Miami Dolphins quarterback Ryan Tannehill just signed a contract that will guarantee him $45 million over the next six years. He was the first of the 2012 quarterback draft class to sign a long term contract. Russell Wilson, Robert Griffin III and Andrew Luck are all looking at contracts coming up as well.

Andy Dalton has signed a deal with the Cincinnati Bengals that gives him an average salary of $16 million. Colin Kaepernick’s contract is a series of team options over six years. Dalton, Kaepernick and Newton where all in the the 2011 draft class. All three have led their teams to the playoffs. As a matter of fact, the only quarterback in the 2011 and 2012 draft classes not to take his team to the playoffs is Tannehill. 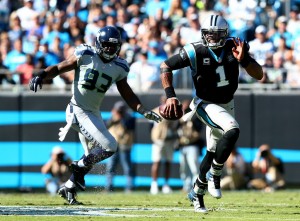 mark on the NFL. Some may say that Cam Newton doesn’t fit the mold for the “face of a franchise.” That is not well founded. Newton is clean shaven, speaks well and has not been involved in any off the field foolishness since he’s been in the NFL.

As for his play, there are few that have the ability to do what he does. Newton can make any throw. He can deliver the ball to a receiver on a comeback route outside the numbers from the opposite hash with ease. He can perfectly drop the ball in a bucket with tremendous touch on nine routes and corner routes. The one area that Newton could work on is not delivering the ball high on deep in breaking routes.

That is where some of the accuracy issues come up when evaluating Newton. His mechanics in the pocket aren’t always the best but that is understandable given how poor of an offensive line the Panthers have had. Joel Corry, a former NFL agent and now salary cap analyst for CBSSports.com gave his take on what Newton has faced while he’s been in the NFL.

“Cam was drafted to the worst team in the league. They haven’t done him a whole lot of favors as far as weapons. They changed out the receivers and at this point, his only proven wide receiver is Kelvin Benjamin. He does have a really good tight end though.” Corry continued; “The offensive line after retirement of players like Jordan Gross isn’t what it should be. Michael Oher isn’t much of an upgrade at tackle. Cam masks a lot of deficiencies offensively.”

Notice how Corry said that Newton masks a lot of the Panthers deficiencies. Newton has been the ultimate dual threat. He has rushed for over 500 yards or more every year that he has played. He doesn’t only gains rushing yards by way of the read option. There are many times when the pocket collapses on him and he breaks a would-be sack before he runs for a big gain. The ability to make things happen when plays break down is very hard to game plan against. It is deflating when it happens on third downs.

Cam Newton led the Panthers to an NFC South Division title in the last two years. Granted, last year’s team won the division with a 7-9 record. The 2015 season is a contract year for Newton. He is set to make $14.6 million this season but the Panthers will be faced with a decision that should be an easy one for them. Football Game Plan spoke with salary cap analyst specifically about the Newton contract.

“Cam Newton has the same agent as Jay Cutler. Therefore, as a floor, the bare minimum that Newton will be signed for is nothing less than $18.1 million per year with $54 million guaranteed with a favorable structure to Cam.” Corry said. “If you take Tannehill’s contract into consideration, the average is almost $19.5 million which will set a new floor. Cam Newton at a bare minimum should be a $20 million per year quarterback.”

Corry also said that Newton would be unlikely to agree to a deal that is more than five additional years. This is because of the likelihood of Newton being able to sign another big veteran contract that would be lucrative provided that Cam continues to play at the level that he is playing now. Corry likened it to what Ben Roethlisberger did this year and what Phillip Rivers will do at some point in the near future.

“Cam may not want to give up more than five years. This would allow him to be in position to sign a third, big veteran contract which would be lucrative. Cam will only go out so long. He should come up for a new deal when he is around 33 years old.” Corry said.

Corry explained that they can place an exclusive franchise tag on Cam or they can put a non-exclusive contract on him. The non-exclusive tag would allow his agent to shop for offers and if a team is willing to give up two first round picks, they can sign him. Corry mentioned that the Cleveland Browns were willing to give up a first round pick for Sam Bradford who is injury prone and used that as evidence that a needy team would be likely to give up two firsts for Newton.

“If you take the five highest 2016 cap numbers for quarterbacks, you come in around $25 million. Knowing that you would be likely to go exclusive franchise tag route, if they franchise Cam Newton for the next two years, they’ll be paying him $55 million over two years. They would be better served making him the highest paid player right now. The second franchise tag would be $30 million after the 2016 tag number.” 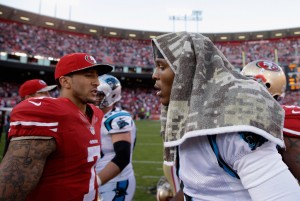 Cam Newton is the leader of the Carolina Panthers after doing some growing up over the last few seasons. Their team would not be able to contend without him. He brings value as a deadly passer and as an explosive runner. The Panthers may not have done the best job of surrounding him with talent but he has been successful regardless. It is time for the Panthers to give Newton the contract that he deserves.

It has already been established that the average for the top five quarterback contracts will be in the $25 million neighborhood. Newton’s floor would be $20 million. It is fair to put him at an average of $23 million which is just below the average for the top five quarterbacks. That being said, Newton’s deal will likely come in around five years, $115 million with $55 million guaranteed.