Yes it happened, it really happened! Many believed it was not possible, but now we know differently. The wool can’t be pulled over our eyes any longer. NFL teams can’t keep making statements like, “Colleges are not preparing these guys for the NFL.” They can’t keep relying on a couple “QB gurus” to crank out ready made mediocre quarterbacks while hoping that they can land the next Manning, Brady, or Rodgers.

For years we were told that Tyrod Taylor was a backup. For years he sat behind Joe Flacco 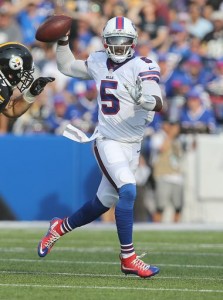 and many believed that the Ravens should upgrade or add a veteran backup in case Flacco went down, but Baltimore felt pretty good about their situation. The untrained public and media thought that Taylor’s free agent exit from Baltimore, and subsequent signing with Buffalo, was nothing more than a fight for a lateral move. Taylor had other plans and apparently, so did new Bills head coach Rex Ryan, who did something rare in today’s NFL.

Rex Ryan did something unusual in today’s NFL. He actually gave a black quarterback, who has been a backup for his entire career, a legitimate opportunity to compete for a starting position. Most mainstream media wrote it off as lip service and just assumed that Cassel would be the starter. But it became clear to more than the few of us who knew that Cassel’s incumbent role was in serious jeopardy. Eventually Cassel was “Wilson’d” and then thrown a life raft by the Bills to be Taylor’s backup. A position that was given to him and not earned as former Bills former 1st round pick EJ Manuel, outplayed him in the preseason as well.

When was the last time you heard of a black backup quarterback getting a legitimate shot as the starter? I believe the last time was Tavaris Jackson and before him you have to go back to Charlie Batch. But throughout the years, there have been countless amounts of capable black quarterbacks that have never been given the opportunity to fail. If they were given the opportunity to fail, they were never afforded the seemingly countless chances that those in the majority are afforded. Cassel, Matt Schaub, Brian Hoyer, Matt Flynn, Josh McCown and many others have been given the reins of an offense on many different occasions, only to continuously fail. 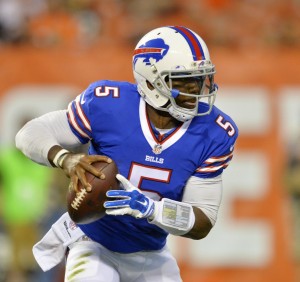 I guess they just deserved it more. That’s what people would have you believe. Well, here’s a reality check; Tyrod Taylor and many other young, black, and capable quarterbacks are tired of being called athletes, dual threats, scrambling quarterbacks, one-read quarterbacks, gimmick quarterbacks or any other negative slight you want to throw their way to justify not allowing them to lead your team.

If you look around college, not only are they coming, but they are coming in droves and you won’t be able to move them all to receiver.