Urban Meyer Is to Blame for the Buckeyes Loss to Spartans 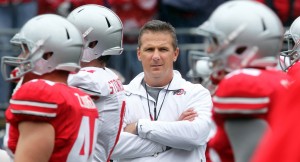 At the beginning of the college football season everyone was under the impression that the Ohio State Buckeyes had the best quarterback situation ever known. We at Football Gameplan felt the same. It was clear to us that Urban Meyer had at his disposal the best weapon in the Big Ten, a physical specimen NFL prototype, and a good college quarterback.

It was clear to us who should be the starting quarterback for the Buckeyes and we never wavered. We spoke of it on podcast, we posted on Facebook and Twitter, and we debated the pundits who did not agree with us. In the end, our belief was not shared by Urban Meyer or the rest of the country apparently as we sat and watched the two time Big Ten Player of the Year Braxton Miller be reduced to a situation weapon while Meyer decided between JT Barrett and Cardale Jones.

Neither had the same level of magic and control at the quarterback position as Miller; and Miller never played receiver. This was a recipe for inconsistency from the beginning. Both QBs were going to spend the season looking over their shoulder or waiting for the other to falter. Miller was going to learn that playing receiver was a much tougher transition than many writers, who have never played the position or the game, suggested.

The results have been what you would expect them to be: flashes of brilliance, but overall inconsistency. While they have been able to get by versus, what most would agree is subpar Big Ten competition, and a weak out of conference schedule, once they ran up against a quality opponent, they were destined to fold. They did that at the hands of a good, not great, Michigan State team without their starting quarterback. 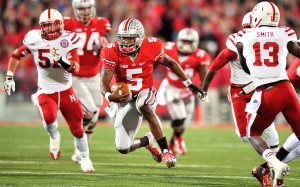 While, I’m well aware of all the conjecture about Miller’s surgically repaired shoulder I still have questions. If Miller is the most dynamic player on your team, why not put the ball in his hand every single play? Wouldn’t it make more sense to have a two headed monster of Miller and Elliott running at defenses than Jones or Barrett? Was his shoulder so damaged that he could not throw the short, quick, passes the Urban Meyer offense has been known for since his previous tenure in Ohio? 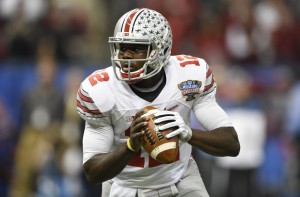 It’s no disrespect to Jones or Barrett but they’re just not the same type of athlete as Miller. Once they were inserted into the offense without all of the weapons they had the previous season, their production was certain to slide. Now Meyer is left to answer questions about his play-calling and the fact that he seems to not have a quarterback that can bail him out of those bad play calls.

Elliott had every right to call out his head coach. Unfortunately, he should have done so before the season. Then maybe it would not have cost the Buckeyes their season.