There were quite a few NFL teams represented when Towson University held their pro day at Johnny Unitas Stadium. The main attraction was edge rusher Ryan Delaire. Cornerback Tye Smith also drew interest from the scouts in attendance. Most of the 19 teams that were at Towson utilize 3-4 defensive schemes. They were there to watch Delaire, a hybrid defensive end/outside linebacker.

Baltimore Ravens head coach John Harbaugh was at the workout as well. He and Delaire spoke afterwards. “He’s an asset. You can always use a pass rusher…can never have enough of them. Ryan is a hard working guy and he would be a good fit for us.”

Delaire chose not to do the bench press but did take part in the other tests and field drills. Here are his test results:

Those results are all despite the fact that Delaire has been recovering from a hamstring injury but he still toughed it out and gave the scouts a glimpse of what he can do. The Philadelphia Eagles put Delaire through a series of linebacker drills so that they could see how comfortable he is dropping back into coverage. Delaire dropped a few throws but recovered caught the ball well in his last series of reps. He looked at ease as he worked on his drops for the scouts.

Overall the workout went well. Delaire spoke with us afterwards. “I feel really confident. I knew that I put in the work that I needed in order to do what I did today. I was really comfortable and felt smooth because I had practice my drops in the weeks leading up to today.”

Tye Smith is a corner that has drawn some interest because of his long frame. He posted a 4.65 time and worked out on the field for the scouts. Smith measured in at 6-1 184 pounds. That is nine pounds less than his weigh in at the combine. “I felt good and I am now at a weight that I feel good at. I feel that I ran way faster than I did at the combine.” He and I joked about how he didn’t have his chain in his mouth like he did at the combine when he drew the ire of Deion Sanders.

Coach Harbaugh spoke about what he saw from Tye Smith. “Good change of direction, good hips. He’s a long lanky guy. He has good hands good hips, all of the things that you want to see in a corner.” Next up for the two Towson standouts will be private workouts before the draft starts on April 30th.

The 2015 NFL Scouting Combine is in the books. Texas A&M running back Trey Williams and Stephen F. Austin running back Gus Johnson were participants at the Combine. They are now looking forward to their Pro Days this month. This edition of the Draft Diary will take a look back at some of their experiences in Indianapolis. 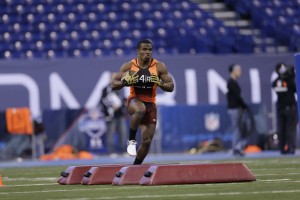 Trey Williams went to the Combine with a mission of showing how explosive he can be. He ran a 4.49 in the 40 yard dash and put up 18 reps on the bench. Williams said that that he drew a lot of interest from NFL teams. “I had some interviews and they went great. Teams asked me to draw up some plays on the board.”

Williams said that teams were intrigued by the versatility that he brings to the table. Many are looking at him as a running back that can line up in the slot and be a key returner as well. Williams’ time in the 40 yard dash was the third fastest among running backs at the Combine. He said that he felt good about his time and will run again at his Pro Day on March 4th. His goal is to get it down even further.

The best part of the Combine for Williams was all of the gear that he got. He jokingly said that everything else was torture. He had to get up at 4am the first day that he was in Indy. Williams said that he also liked catching up with some of the guys that he already knew such as Shaq Thompson, Duke Johnson and Mike Davis. His roommate at the Combine was Jeremy Langford.

The Pro Day at Texas A&M is going to present another opportunity for Williams to show that he has the ability to be an explosive, do-it-all back. He is training for the Pro Day at The Athletic Lab in Houston. “We are working on running back drills. I am working on catching a lot of footballs. We are also working on getting a better start in the 40 yard dash.” 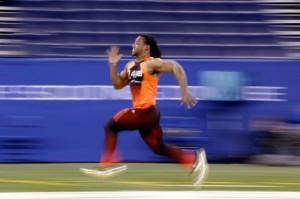 than Williams. He showed how strong he is by putting up 26 reps on the bench, which was among the top totals by a running back. Johnson said that it felt good to be one of the strongest running backs there and that it was what he was looking to prove.

Like Williams, the grind of the Combine was more than he expected. “The Combine was a great experience. We had to go all day. It was nonstop, no breaks. We just had to get it all in.” The medical testing was a breeze for him. He said that he hasn’t had any surgeries or major injuries and that allowed him to be cleared easily.

Johnson’s roommate was Notre Dame wide receiver Devaris Daniels. His favorite part of the Combine was the comradery of the running back group. He liked how they pushed each other throughout the workouts. “There was no hostility. No one had the mindset that they were better than the other. We all just tried to show what we could do.”

There were five teams that talked to Johnson at the Combine. He said that the first team to talk to him was the Dallas Cowboys. Growing up, he was an Emmitt Smith fan so that had a special meaning to him. He said that teams asked him a lot of personal questions to get to know him better.

Be sure to stay tuned for the next Draft Diary entries after Trey Williams and Gus Johnson’s Pro Days on March 4th and March 31st.