Campus Kickoff: Alabama’s Offense Has the Potential to Explode in 2019
Gene Clemons

When Nick Saban introduces his 2019 version of Alabama football, many of the questions will surround star quarterback Tua Tagovailoa. While many will focus on whether Saban will add to his legacy, or if Tagovailoa will become the first Tide quarterback to win the Heisman trophy, both storylines will heavily depend on the Alabama unit that is the new Greatest Show on Turf: the receiving corps. 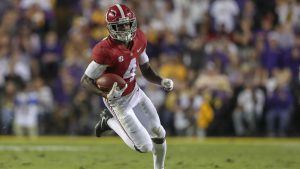 This group of Tide receivers may be the most talented collection of receivers on one team…ever! With all due respect to the ’96 Florida Gators, ’99 Florida State Seminoles, ’00 Miami Hurricanes, and the ’12 Clemson Tigers, who all had ridiculously good receiving corps, the Tide possess a level of depth, aptitude, and refined skills that has never been seen in college.

This unit is led by 2018 Biletnikoff Award winner Jerry Jeudy, who has proven worthy of consideration for the top pick in the 2020 NFL draft. He has everything you need in a franchise receiver: size, speed, agility, explosion, and hands. His fluidity in and out of routes is something to admire and he also has big-play ability. His 63 receptions for 1315 yards and 14 touchdowns were also good for consensus 1st Team All-SEC and All-American honors. 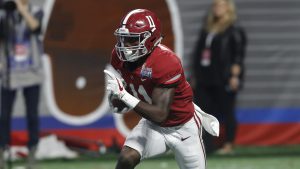 possesses first-round potential and is most likely using this season as a coming out party, similar to Jeudy and Tagovailoa after 2 quality seasons for the Tide.

The third immensely-talented junior pass catcher is Devonta Smith, who introduced himself to the world in the 2018 National Championship game when he caught the 41-yard touchdown pass that made Tagovailoa a household name. He followed that touchdown up with a sophomore campaign that amassed 693 yards, on 43 receptions and six touchdowns.

Despite the talented pass-catching options in front of him (including tight end Irv Smith Jr), sophomore Jaylen Waddle earned quality time on the field and earned Freshman All- 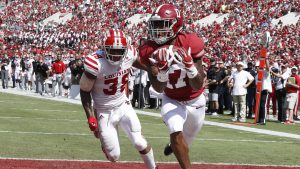 Adding to the unit’s depth are two intriguing redshirt sophomores in Chadarius Townsend and Tyrell Shavers. Townsend made his mark as a special teamer last season, but has s good mix of receiving and running ability and could be in the mix to spell the top four pass catchers. Shavers is a 6’6 athlete who could mature into a great possession guy and jump ball specialist.

Pushing those two is true freshman (and Canadian import) John Metchie. Metchie is a highly-touted prep receiver who enrolled early at Alabama and flashed signs that he may be a factor sooner, rather than later during Alabama’s spring game where he had one deep grab in traffic and several other catches that kept the chains moving. If there’s one thing we’ve learned from Nick Saban in his time at Bama, is that playing time is a meritocracy and he doesn’t mind playing freshmen.

It is an embarrassment of riches for Tagovailoa and offensive coordinator Steve Sarkisian. There’s a good chance that this group will produce three first round NFL selections and five selections in the first two days of the draft. That would be a feat that would put them above the rest, helping make the case for them being the best receiving corps that has ever existed in college.

Stay tuned because the “Greatest Show on Turf” opens August 31st in Tuscaloosa against Duke and will only be available for a limited time. Enjoy it while you can.