After three very productive seasons at the University of Florida as a dominant force on the defensive line, Bryan Cox Jr. spent his senior year watching his numbers dip while dealing with injuries. So this week at the East/West Shrine Game, Cox will have an opportunity to reintroduce the football world to how disruptive he can be. 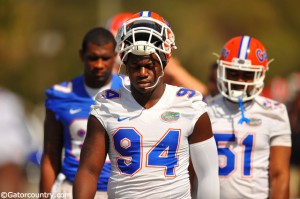 Cox combines size, explosiveness, and just the right amount of nasty together to form a player who relentlessly pursues the ball. That relentlessness led to a junior campaign that tallied 46 tackles, 11 tackles for loss, 3.5 sacks, and two forced fumbles. He was a major cog in a defense that has been stout for the past three years in spite of a floundering offense.

The Gators defensive end has a lineage that says he can have success at the next level. His father Bryan Cox was a long time linebacker in the NFL and you immediately notice the younger Cox’ high skill level when he plays. He does a great job of using his hands to fit and shed blocks. He also has a great bend and low pad level when he plays. His athleticism allows him to track down plays moving away from him, while also giving him the ability to redirect to make plays that he may have diagnosed incorrectly (though that doesn’t happen much).

Cox has the ability to perform as a 4-3 defensive end and as a 3-4 end because of his athleticism, strength, and football IQ. This versatility will make him very attractive to all teams regardless of defensive scheme. Because of the depth of the defensive line in the draft, Cox who definitely has day one ability will definitely be fought over on day two of the draft in NFL war rooms across the country.

One should not be surprised to see him have an immediate impact in the NFL if given the opportunity, especially if he is back to full strength. That impact is currently being felt at Shrine Game practices and will be on display during the game.