“But he’s a D2 player!” That’s the normal first reaction to Shepherd University wide receiver Billy Brown when someone brings up his name as a potential draft prospect. But the NFL doesn’t care about where you are from, it doesn’t care about the road you took to arrive there. The NFL only wants to know two things: can you play and can you help a team win?

Brown checks both of those boxes. It’s obvious that he can play. In his four seasons at Shepherd, he amassed 249 receptions for 4,071 yards and 43 touchdowns. This includes a senior season where Brown posted 99 receptions, 1,580 yards, and 22 touchdowns. Those are video game numbers! It’s also obvious he can contribute to winning. The past two seasons have seen the Rams advance deep into the playoffs playing a total of 14 games each season. Both seasons, Brown has received All-American honors. So clearly he was a major contributor to the team’s success.

One of the more intriguing things about players like Brown from lower levels of college football is that they are not afforded all of the luxuries that their FBS counterparts have available to them. That seems to makes them more hungry and humble. Another byproduct is that when they are afforded resources like an endless athletic training staff, a strength and conditioning staff, position coaches and assistant position coaches, doctors, and tons of equipment used to increase physical fitness and recovery from injury and fatigue, they tend to make tremendous strides in their athleticism in a short amount of time. 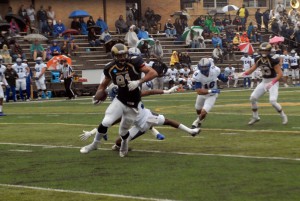 At 6’4” 240 pounds Brown is an ideal size of the new age H-back in the NFL. His receiving prowess makes him dangerous and gives him the versatility to be moved out wide, in the slot and even inline. It’s the versatility that the West coaches at the East/West Shrine Game practices have been putting to use, as Brown has been a standout in practices through the first few days. It use to be that players making the transition to tight end or H-back struggled early because they brought no value in the run game but in today’s NFL, thanks to multiple packages used in games, players who have a defined skill can be utilized and put in positions to take advantage of their skillsets.

So what are Brown’s skills?

To start, he has great hands and unlike many pass catchers today, he uses them. He does a great job of attacking the ball and extending his arms to snatch the ball out of the air. The 188 receptions in two years speaks to this ability. He also used his frame to shield defenders from the ball or simply jumps over them to grab the ball like a basketball player snatching a rebound. Although he doesn’t have elite explosion off the line of scrimmage, he has great acceleration which allows him to break defenders’ cushions and pull away from them when he gets into open space. Those skills are very valuable in the pros, it’s why Brown has been extremely noticeable at the East-West Shrine Game practices this Week and will definitely get a chance to see what he can do at the highest level.