Who knows if there’s an official 40 time on Rodney Adams and quite honestly, who cares! The one thing you know for sure is that Rodney Adams is fast! After watching every snap of the University of South Florida offense in 2016 many of which came in person it was easy to tell how special Adams was.

The stat books echoed the same sentiment as Adams accounted for 67 receptions, 822 yards, and five touchdowns. He also added another 236 yards rushing and five touchdowns on only 23 carries. Those numbers back up a junior campaign where he amasses just over 900 combined yards and 10 touchdowns. 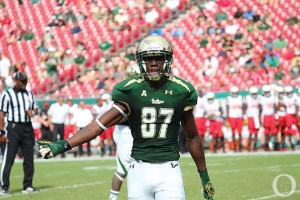 Adams consistently took the top off of every defense he faced including a Florida State defensive backfield full of future NFL talent. So what makes Adams ‘fast’ better than most prospects in this year’s draft’s fast? It’s acceleration as he gets to the top speed so quickly that many times cornerbacks are beat before they realize it. It’s also what allows him to have so much success in the run game as his speed and acceleration get him around the edge consistently.

Special teams is normally where rookies look to shine initially in the NFL and Adams should be no exception. He shined as a kickoff returner in his three seasons as a Bull amassing better than 1100 yards on 44 returns.

Rounding out Adams’ dynamics are his ability to get in-and-out of breaks and maintain speed. It’s a skill that will serve him well in the NFL where most quarterbacks have to throw the receiver open and not wait for them to create separation. He has Antonio Brown-esque ability.

It’s a shame he’s missing the Shrine Game this week due to injury. Hopefully he’s healthy soon so that he can put his talents on display. He has first round talent but will most likely be a day two selection. If that happens, expect him to leave the board the way he plays the game, fast!