For the past four seasons, the HBCU National Champion has been decided at the Celebration Bowl, where the best from the SWAC, matches up against the MEAC’s finest. However, when Alcorn State kicks off versus North Carolina A&T this Saturday at Noon EST on ABC, they may be doing so dealing with the reality that the best HBCU team is not present. 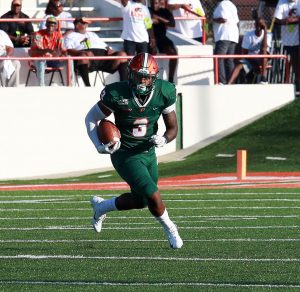 Over the past two seasons, Florida A&M’s 12 conference wins is on par with both A&T and Alcorn. This year, they have widely been recognized as the best D1 HBCU team in the country, but they still are not in Atlanta. That is because they self-imposed a ban for infractions that occurred at the university before most of the athletes on the team was even there. As a result, their 7-1 conference record this season does not yield a recognized championship. Instead they have to watch that title go to the Aggies between the Aggies. The Rattlers also have to watch their Celebration Bowl birth be claimed by a team they defeated 34-31 in overtime.

But do they have a legitimate argument to be named HBCU National Champs? Let’s take a look.

FAMU lost to a better team than both Alcorn or A&T. Bethune-Cookman was one of the better teams in their conference this season, though the same can not be said about Grambling and Morgan State. Grambling had a down year by their standards and Morgan State only won three games all season. While A&T has the highest scoring average of the three (35.7) Alcorn and FAMU are right behind them (32.8, 32.7 respectively).

If the Braves are finally able to defeat the Aggies, then there will be a collective cheer for Alcorn State finally overcoming, and winning their first HBCU National Championship since this new format was implemented. However, if they fall again to A&T, there will be a conversation, especially from Tallahassee, that FAMU is in fact the best HBCU in all of the land because they hold the only head-to-head victory of the three schools.

So while you are watching the 5th installment of the Celebration Bowl, keep in mind that the results may have implications beyond the two teams on the field.

And if you’re Bowie State…then, well, that’s an entirely different conversation all together!