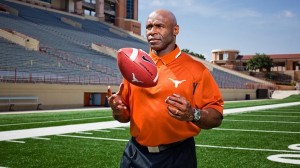 Charlie Strong was named head coach at Texas on January 5th after the Longhorns brass exhausted every avenue to find their next head coach. Strong was by no means the first choice, or close to it, but he had to take this job. As a black man, Strong had to realize that minorities rarely have been afforded the opportunity to run the football program at a storied university. Strong also has to know that he will have less time to return the Longhorns to prominence.

This is just the way for minorities in these power positions. Strong is already taking heat in Austin because he is cleaning up a mess that the Mack Brown era left behind. In this climate of football, being wild and undisciplined, Strong is being criticized for trying to implement discipline and accountability. Media personalities like Danny Kannell and Paul Finebaum have led the charge against Strong and his tenure at Texas so far. These things are never surprising, especially when you consider the landscape of football especially in the South. While these football teams are filled with minority players, there is only a spattering of minority coaches.

Currently there are 13 minority heads coaches in the Football Bowl Subdivision. Only 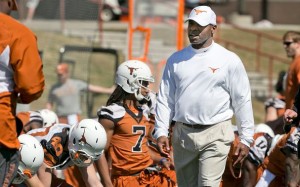 seven of those coaches’ head power five conference schools and two are in charge of programs with historic national reach (Strong, Texas and Franklin, Penn State). The 13 minority head coaches reflect 10.1 percent of the 128 FBS universities. That is incredibly low percentage considering the amount of minority players they lead.

Why are minorities lacking representation in college football?

There seems to be no real answers but one of the thoughts is that college football is still an “old boys’ club” and they are still not willing to open the flood gates to minority coaches like they have to minority players. Like in the NFL, the problem goes much higher because there are only nine minority athletic directors in the FBS. I would venture to say that there are even less minority presidents. The question becomes how you get people to hire men that they can’t identify with? We normally attract people we feel most comfortable around and that seems to come back to race at some level. The changes have to be made from the top down and these minorities have to be given a chance to succeed or fail. 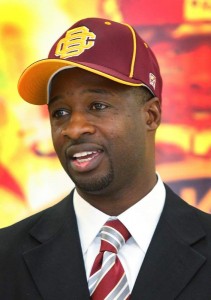 The number of minority coaches represented at the Football Championship Subdivision (21.3%) doubles the FBS. That number is deceiving because it includes Historically Black College and University conferences. The SWAC (nine of 10 coaches are minorities) and the MEAC (10 of 11 coaches are minorities). When those two conferences are removed that percentage (6.9%) is even lower than the FBS. So there are no signs that change is coming from the bottom up.

When was the last time you saw a minority assistant coach from the NFL given an opportunity at a major university?

Name a minority coach who has been given several opportunities at different FBS universities?

Qualified minority candidates are out there but it takes outside the box thinking to find them. In the NFL, you see position coaches receive head coaching jobs but you rarely ever see that at the collegiate level. With head coaches being figureheads and CEO’s now, isn’t it possible that a strong minority candidate may be a wide receivers coach, a defensive backs coach, or a special teams coordinator? They usually end up being great recruiters and that is the name of the game in college football. The Rooney rule in the NFL has not seemed to increase the number of minorities dramatically but it has stabilized it. The NCAA does not have a stabilization problem, but they definitely are not growing their minority numbers. 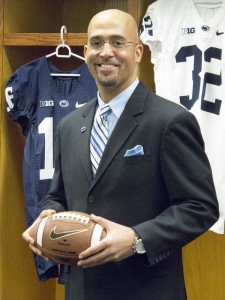 When do we stand up as a society and say that this is not right? When do we leave the old world behind and step into the 21st century? Will recruits and parents even begin to look for programs being ran by men that look and possibly grew up similar to them? Can HBCU’s increase their profile to attract more prominent recruits?

There are far more questions than answers about this subject. The only answer I have is that if you give a quality minority coach an opportunity (like Charlie Strong) they will have success just like any other quality coach.