In our 13th edition of Tight End Confidential, we take a look at the 3rd ranked group on our list. This is a group headlined by a breakout star and a gang of unproven, yet talented players; the Cleveland Browns.

This ranking has just as much to do with the organization as it has to do with the players involved. For some reason the Browns have been really good at identifying tight end talent over the years, and they have hit on a number of acquisitions at the position. Also sweetening the pot is the addition of head coach Hue Jackson, who has a reputation of getting the best out of quarterbacks as well as utilizing the tight end in his offense. 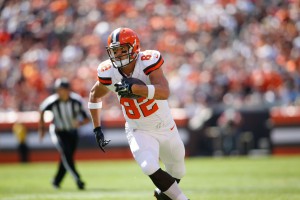 The Browns tight end corps is led by Gary Barnidge, who spent his first four seasons in the NFL as a member of the Carolina Panthers. In 2009, his second in the league, Barnidge flashed signs of brilliance when he averaged 20 yards per reception in limited action. Unfortunately his growth was stunted and playing time limited by injury, and the addition of  Greg Olsen to the fold. His move to Cleveland saw him fighting for playing time with Jordan Cameron and others.  But when Cameron “took his talents to South Beach”, it opened up an opportunity for Barnidge to really display all of his talents.

His blocking was instrumental in establishing a legitimate run game led by rookie Duke Johnson. In addition, he was the Browns leading receiver amassing 79 receptions for 1,043 yards and nine touchdowns. His effectiveness comes from his ability to be used in both aspects of offense; a talent that only a few tight ends seem to posssess in the NFL today.
At 30 years old, the 6’6” 250 pound Louisville product is in the prime of his career and just in time to inherit a motivated coach in Jackson, and a motivated quarterback in Robert Griffin III. The sky’s the limit for Barnidge in this offense and we can expect that his breakout season last year was not a one hit wonder.

Behind Barnidge is a slew of young talented inexperienced tight ends who have a chance to be part of a rebirth in Cleveland. The first man up will be EJ Bibbs, a pass receiving tight end out of Iowa State. In his final collegiate season, he hauled in 45 passes and accounted for eight touchdowns. He has a year under his belt with the Browns and with this new regime, he has the opportunity to be utilized split wide, in the slot, and in the backfield. That versatility pairs perfectly with Barnidge and could make them a very good tandem.

Other young ends who will look to find their way onto the roster are: Conor Hamlett, a massive 6’7” end from Oregon State, Ivy Leaguer Seth Devalve from Princeton, Southern Cal thumper Randall Telfer and Pittsburgh standout JP Holtz. They possess skills that are valuable to a team and the decision will most likely come down to who will be the most versatile.

Regardless of how it shakes out this group will be heard from and ultimately they will prove their ranking.