Our 4th ranked unit in our Tight End Confidential series boast a lot of young talent at the position. The Minnesota Vikings have players who can be game changers in the run and pass game, especially with a conservative head coach and a lights out defense. 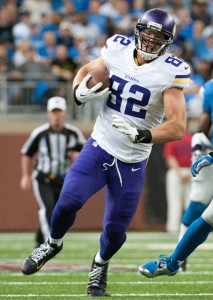 Kyle Rudolph is a very talented tight end from Notre Dame who was slowed in previous seasons by injury. Last season was his first full season since 2012 and he responded with 49 receptions for 495 yards and five touchdowns, in an extremely conservative offense. As head coach Mike Zimmer becomes more secure with quarterback Teddy Bridgewater, hopefully the defensive-minded coach will loosen the reigns on Bridgewater. That will result in an even better season for Rudolph, who at 26 years old, is just entering into the prime seasons of his career. Rudolph is one of the rare starting tight ends who is effective as a blocker and pass receiver, which is why he is so dangerous in the play-action passing game. Rudolph has Gronkowski-like ability, but has not had the opportunity to have the type of production that warrants that comparison.

Rudolph is backed up by another talented, and complete tight end, in Rhett Ellison. At 27 years old, Ellison and Rudolph have had the opportunity to grow together. They both have been developed with the idea of being intricate parts of the Vikings offense, which makes them dangerous in two tight formations. Ellison make be even a little more bare knuckles than Rudolph. That will need to be the case when they are asked to stay in and help an offensive line that struggled in pass protection. Ellison is just as valuable as Rudolph because he possesses starting ability.

The third end in this group is MyCole Pruitt. At 6’2” 250, Pruitt is a guy who brings a different dynamic to the table. He has the ideal size and athleticism of an H-back. He can line up in the backfield and split out wide. While his blocking still needs to improve to NFL caliber, it isn’t horrible. Pruitt has really good hands and can be a change of pace guy at the position and helps the Vikings stretch the field down the middle even more.

The three guys make this group complete and the offense makes it very hard to gameplan for them. The result is a really valuable unit to an offense that will need a counter to the run game led by Adrian Peterson. That’s what makes them so important and really high on this list