The second article of our Tight End Confidential series the Indianapolis Colts comes in at number 14 of our 15 best tight end units in the NFL. 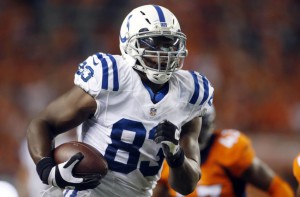 Many would believe that losing Coby Fleener would make the Colts worse in their unit, but it actually opens up more opportunity for Dwayne Allen and the other tight ends on the roster. Allen has shown flashes of elite ability. In quarterback Andrew Luck’s two best seasons, Allen was a major factor in his success. In 2012, both of their rookie seasons, Luck hooked up with Allen 45 times for 521 yards and three touchdowns. In 2014, they connected on eight of Luck’s 40 touchdowns. Now that he doesn’t have to share time with Fleener, and if he is able to stay healthy, Allen can be a 1000 yard receiver with double-digit touchdowns. That, mixed with his excellent blocking ability inline and in space, would make him a top five tight end in the league.

As the penciled in number two tight end with Fleener’s exit, fourth-year guy Jack Doyle has a chance to make the number two spot his home. He is a balanced, hard-nose guy who will actually improve the blocking in two-tight end sets. While he is not a burner, he knows how to work his way around the field. His blocking will be key to improving on a horrible run offense in 2015. The Colts also have Cameron Clear and Mike McFarland on the roster. And while both bring interesting skill sets to the table, the most intriguing guy on the roster is former University of Miami forward basketball forward Erik Swoope.

Swoope probably stunted his growth as a football player by not transitioning to “The U” football team in his senior season. Had he done so, he may have been drafted in 2014. Instead, he was picked up by Indy as a free agent and has spent the last two seasons on the practice squad learning his craft and adding 15-20 pounds to his 6’5” frame. He was elevated to the active roster late in the season last year when Allen was out. He clearly can be another weapon for Luck, especially in the red zone.

That would give the Colts three legitimate options from that position and probably help to make the decision to let Fleener go. They still need to stay healthy (Allen), improve route running (Doyle), and continue to work on their craft (Swoope) but they are capable of doing so. If they do, this unit will be a handful for defenses.