In the first edition of Tight End Confidential, we take a look at the Top 15 tight end units in the NFL starting with the Seattle Seahawks. 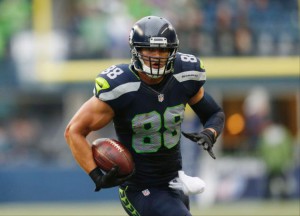 The Seahawks have a good core of tight ends to work with anchored by Jimmy Graham. Graham had a difficult adjustment coming to Seattle from New Orleans where they never really asked him to block. He actually did most of his damage with the Saints detached from the offensive line. Seattle wanted him to make a larger contribution to their balanced offense by doing more inline blocking. He struggled to adjust to his new role and with an injury, but with one year under his belt, he will be much better in that system. He is still an elite level athlete and mixed with his height, it makes him an absolute nightmare in the red zone. Especially when teams have to concern themselves with the quarterback’s ability to run the ball.

In addition to Graham and his athleticism is Luke Willson (not to be confused with the actor), who is another long athletic guy with a good grasp of the Seahawks offense as he enters his fourth season. Willson took advantage of the attention being paid to Graham and the extra playing time he received when Graham was out with injury last season. He’s put together two solid seasons and will be a good compliment to Graham, as well as another weapon for quarterback Russell Wilson to take advantage of as this offense continues to open up.

The other two guys playing tight end for the Seahawks are Cooper Helfet and Nick Vannett. Cooper has received some playing time for Seattle over the past couple years and he has performed decently. He has been a fit on the offense, and on special teams, but he will have to fight off a talented rookie in Vannett. The former Ohio State Buckeye had his best season as a junior when we hauled in five touchdowns. Vannett is long and athletic like both Graham and Wilson, and may bring more to the table as a blocker as well.

With Graham at the top, Seattle has star quality; they also have depth, versatility and youth behind him. They all fit well with the competition atmosphere that has permeated through the Seahawks program. It will be fun to watch how they employ these weapons as they continue to turn the offense over to Wilson. The number 15 unit on our list has a good chance to advance their status with a bounce back season from Graham and continued improvement from the guys behind him.