In this next edition of Tight End Confidential, we move into the top 10 units in the NFL. The Jacksonville Jaguars long, athletic duo helps them check in at number ten. 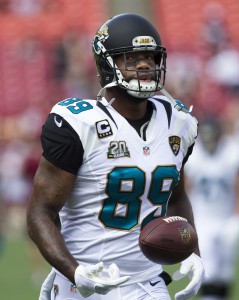 Many believe Jacksonville is a team on the rise. They have accumulated many weapons on both sides of the ball. Although it has not affected the win/loss column yet, the offense has the ability to be explosive. Much of that is thanks to the work of these mid-level guys in Marcedes Lewis, and Julius Thomas.

Lewis is the elder statesman of the team. At 32 years old, he has spent his entire 11-year career with the Jaguars. In that time he has seen the team point up, and down, and now he hopes that he can help them push to the top of the AFC South before he retires. At 32, Lewis is still very effective in an offense that spreads the ball around to several receiving options, including two other tight ends. He still has the ability to get down the field and the toughness to pick up the hard yards. He has been a consistent in-line blocker and works well into the Jaguars run game. Lewis continues to be a matchup nightmare for defenses because of his size. At 6’6 270 pounds, he is physically imposing and hard for defensive backs to get their hands on him or knock him off his route; he even makes linebackers look small.

Julius Thomas was a free agent signing last season after spending his last two seasons in the league catching passes from Peyton Manning. He was able to parlay those double digit touchdown seasons into a nice payday from Jacksonville. He was able to put together a solid season, but fell way short of his touchdown production in Denver. Part of that was due to injury, and the other part was sharing time with other tight ends. A second season in the offense should see his numbers improve. We should also look for more red zone targets for the 6’5 260 pound former basketball player this season.

With the exit of Clay Harbor, who signed with New England, and a few no-name guys aligned behind them, Lewis and Thomas will need to stay healthy. If they do, they will be a handful for any defense. Hopefully quarterback Blake Bortles takes a page out of Peyton Manning’s playbook and targets the tight ends more. If he does, then maybe they can erase their perennial top 10 draft pick appointment.