In the fifth edition of Tight End Confidential, we take a look at the 11th best tight end unit in the NFL, the Buffalo Bills. 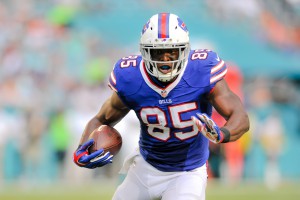 Bills head coach Rex Ryan’s calling card has always been defense and an effective run game. But one of the byproducts of an effective run game is equally good play-action passing. That passing game became more potent last season with the addition of former Miami Dolphins tight end Charles Clay. Clay was a weapon for the Dolphins and has brought his play-making ability to Buffalo. He is a first down machine averaging over 10 yards per reception. This is extremely valuable to a team with a conservative offense. Clay has the toughness to play between the hashes but the explosiveness to stress safeties. Those skills help a quarterback like Tyrod Taylor, who may throw the best deep ball in the NFL, stretch the field when necessary. That has resulted in nine receptions of over 20 yards.

Clay is joined by former Razorback Chris Gragg, who is in his third season with the Bills. Gragg, like Clay, bring talents to the table as a receiver and as a blocker. Gragg was instrumental in the run game and when he was called upon in the passing game, he averaged 12 yards per reception. He has improved every season in the league and going into his fourth season, he will play a pivotal role in making this offense go. Gragg started a few games this season when Clay was out with injury and he could start on several other teams.

The Bills third tight end is Nick O’Leary who was limited in his rookie season by injury. He was only active in four games in 2015 but the former Mackey Award winner has great upside. He only had one reception last season, but it was for 37 yards. He brings toughness to the table and his versatility allows him to line up in the backfield as a wing, and inline.

The best thing about the Bills tight end corps is that they are carbon copies of each other physically. All three are 6’3” and around 250 pounds. In addition to similar size, all three have excellent pass catching ability and could hold their own as run blockers. Look for their production to hold steady as Buffalo really does spread the ball around in their offensive attack. But the one improvement that you should definitely expect them to make, is to increase the amount of touchdowns hauled in at the position. Ultimately, they will be a major reason why the Bills have success in 2016.