The fourth edition of Tight End Confidential is where we find the 12th rated tight end unit, the Tennessee Titans. 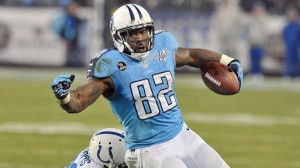 The Titans tight end corps is anchored by two veterans who have continued to improve in their roles over the years. As a result, they probably have one of the more seasoned group of tight ends in the NFL. Both Delanie Walker and Anthony Fasano are over 30; 31 and 32 respectively. Not only does it seem that both have much more left in the tank, but one could say that both are in the prime of their careers.

Delanie Walker is an established 1000 yard receiving tight end who was able to achieve that feat while breaking in a rookie quarterback, and catching passes from backups. His 94 receptions and 1088 yards were the most of his career, and he tied his career high in touchdown receptions with six. This year will be another in the offense with hopefully a healthy, and much more polished, Marcus Mariota throwing him the ball. That continuity in the pass game, and hopefully an improved running game with the addition of Demarco Murray and rookie Heisman trophy winner Derrick Henry, should help him post another career season.

Anthony Fasano has spent his career being a really good number two tight end. He has been effective in Dallas, Miami, Kansas City and now Tennessee, as a pass catcher and blocker. He’s always been an effective number two guy because he can work inline or detached. He has also never been afraid to do the dirty work. He has lined up in the backfield, in the slot, inline, and as a wing, which makes him incredibly flexible. When you add that flexibility, with the flexibility of Walker, you can see why these two are a great dynamic duo in the NFL.

There will be a nice battle for the number three guy between many names that will not sound familiar to casual fans. Will the Titans continue to roll with eight-year veteran Craig Stevens who is a good blocker, or will they look to go in another direction with mid-twenties additions in Phillip Supernaw, and Jerome Cunningham? Or will they go with the undrafted free agent from the Tennessee, Alex Ellis? Who’s left standing may come down to their biggest impact on special teams.

Don’t be surprised if you see the Titans in more two-tight sets this year as they try to take advantage of the run game and the play action off of that run game. It also gets two of their best receiving assets in Walker and Fasano on the field. They should help to produce an improved offense for Tennessee.