“OJ” in the New Abbreviation for “Can’t Miss”

If you’re a talent evaluator, novice or professional, and you are following the proceedings in Mobile at the Senior Bowl, then you are watching OJ Howard. Don’t worry, you don’t need to watch long, his talent is evident from the moment he touches the field. What’s not to love? He may be the most ‘can’t miss’ prospect in this draft. He has ‘star’ written all over him.

He’s the new “Juice” with similar Swiss army knife skills as the USC version of OJ just from the tight end position. Seriously, what can’t he do? If you need someone to: 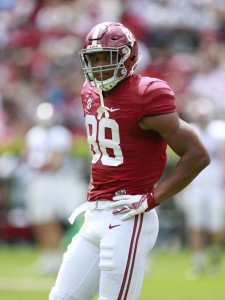 Align in the slot: OJ

Put their hand in the dirt: OJ

Line up on the wing or in the backfield: OJ

Throw a jump ball to: OJ

Pick up a first down: OJ

Turn a short pass into a big gain: OJ

Haul in a deep pass: OJ

The 6’6 250lb physical specimen has Kellen Winslow/Martellus Bennett-type potential and with all due respect to this extremely deep tight end class, Howard is on a different level. At worse he’s an A+ blocker with move-the-chain ability. At best he’s an impossible to cover game-changing playmaker.

He’s already been impressive during practice and according to Football Gameplan’s Emory Hunt, he was a consistent winner in one-on-one drills as well as hauling in a couple spectacular over the shoulder catches. Most of the Twittersphere seemed to agree and it’s not really surprising. If Howard would have declared for the draft last season he would have been a first round pick and the first tight end off the board. This year it’s an inevitability.

Many prospects futures will be discussed and debated this week. They will have their skills dissected and evaluated to decide which system would fit them the best. There will be some who have discussions about prospects that would be better served to change positions. To evaluators and scouts everywhere, OJ Howard simply needs to say you are welcome. Because you won’t have to spend any time deciding where he belongs.