Michael Roberts is a Target!

Mike Roberts only started one season at Toledo but he quickly became quarterback Logan Woodside’s favorite endzone target. He hauled in 16 touchdowns which accounted for 35% of the total amount of scores thrown by the junior signal caller. Even as a spot duty guy his junior season, Roberts caught four touchdowns on 21 receptions. 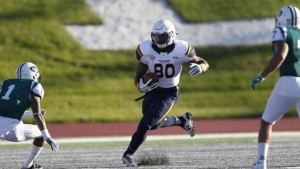 What makes him a target isn’t difficult to discern. At 6’5” 250 lbs, he’s easy to locate on a field and able to shield defenders like a power forward attacking a rebound. There has been two big differences you see in Roberts from last season to this season. The first is his body. He seems more defined and you can tell he spent a lot of time in the weight room getting prepared to carry a much heavier load as a senior. The second is his catching radius. Because he is catching the ball far more this season with his hands instead of letting it get into his body, he has been able to bring in balls that he may have normally not reached. These two changes allowed his athleticism and natural knack for pass-catching flourish and the results are evident.

Last week at the Shrine Game he comported himself well and in the game had two catches on two targets. His performance earned him a spot this week at the Senior Bowl. This will be yet another opportunity to raise his profile against some of the best seniors that college football has to offer. Last week he lined up all over the place for the West in the Shrine Game.

This week should be interesting to see if he spends more time attached because the one true unknown, is his consistency blocking inline. His explosion off the line and his frame give him the natural tools to get the job done; and so it comes down to continuing to perfect his technique and stay on blocks longer. As a pass catcher, he has a very polished feel to him. He does a good job of getting in and out of breaks and adjusting to the level of the throw. He is also a major weapon in the red zone.

He should also be helped by better quarterback talent here at the Senior Bowl than what he had to work with at the Shrine Game. Hopefully a few more targets will come his way this weekend. Another solid week, along with navigating the combine and subsequent workouts, should put him in line for a NFL Draft early day three call from a team. Yes, Mike Roberts is a target and NFL coaches and front office executives have him clearly in their sights.