When you first see Zach Banner, your initial reaction is understandable; he’s BIG! Banner’s more than simply big because he’s a football player, he’s even big by football players’ standards. At 6’9” 360 lbs, Banner is big for a basketball player. In fact, it’s his basketball background that alerts you to the truth about Banner.

Banner has been the starting right tackle for USC the past three seasons. In that time he has performed well against many talented defensive lineman in college football. One of his strengths is his run blocking abilities. He excels with down blocking, routinely collapsing one side of the defense and creating cavernous cutback lanes for the running back. He is a good pass blocker from the right side and has the ability to ride his defender around the quarterback. 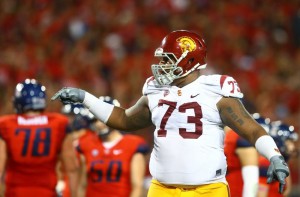 What seems to be missed when evaluators try to value Banner is his athleticism. He moves in space extremely well. He consistently gets to the second level in run blocking and has the ability to reach block and pull like a guard. He has calm feet in pass blocking, and in space, which speaks to his basketball background. You rarely catch him off balance because his feet are always in good position. He also seems to take pride in punishing his defender. A little nasty seems to be a separator between those linemen who thrive at the next level and those that end up bouncing from team-to-team trying to stick. In the NFL, Banner could see his draft stock increased because he has abilities that make him valuable as a tackle on both sides and as a guard. With the restriction of roster limits, that versatility is paramount.

This week in Mobile will be important for Banner to continue to show that he can be a dominant force on the right side and maybe begin to show the versatility that could see him line up at left tackle or at guard. Some question his pass blocking so this will be an opportunity to silence his critics and possibly make himself more money. All of these things come without ever mentioning that his size allows him to swallow defenders in both run or pass blocking. So when you watch Banner this week look at all the other things that make him special, don’t get caught up in the obvious. We get it…he’s BIG, but he’s also a tremendous football player.