Chris James: What Went Right for the Denver Broncos

There usually isn’t much to look forward to for a 5 – 11 team but the Broncos are a rare case. What went right for a recent Superbowl champion that ended the season six games under .500? 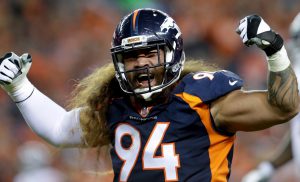 The defense improved against the run with the addition of Domata Peko Sr. A unit that was bottom ten in 2016 moved to 5th in 2017. The highlight came in week two, holding the Dallas Cowboys to 40 yards on the ground. Zeke Elliott had a career low output with 8 yards on 9 carries. The passing defense continued to be dominant as Harris Jr. & Talib proved to be one of the best duos in the league. We also saw the emergence of Justin Simmons as a big play safety. He looks like another stud to add to the Denver no fly zone.

There was week-to-week improvement from 1st round pick Garret Bolles who was my top-rated OT. We also Demaryius Thomas prove his status as a top flight WR despite the horrendous play at QB. The run game regained its swagger late in the season once CJ Anderson was at full strength. And the position with the most depth heading into 2018 is TE players like AJ Derby, Jeff Heuerman, Virgil Green, and Jake Butt.

It’s not often that a team with this much talent gets to draft in the top 5. Broncos fans should relish in the outcome for the Dallas Cowboys following a top 5 pick in the 2016 draft.

Gene Clemons: What Went Wrong for the Denver Broncos

Denver could have traded for Colin Kaepernick. They could have also picked him up when he left San Francisco. John Elway rolled the dice on the quarterbacks on his roster and he crapped out. The Broncos offense was one of the worst in the NFL in 2017. Three different quarterbacks were under Center for Denver and not just because of injury, but because of 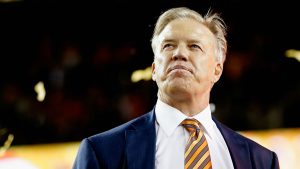 That offensive inconsistency impacted a defense that was built on pass rushing and pass defense. They simply spent too many snaps on the field and opposing offenses were able to take advantage of that fatigue.

First year head coach Vance Joseph had some growing pains but Elway did him no favors with the roster he constructed offensively, and in the manner he allowed his head coach to be blamed for that construction. The smartest move Elway made all season was pulling Joseph out of the fire that had become extremely hot with media takes that said he should be fired after his first season on the job.

That would have been another bad move by Elway. 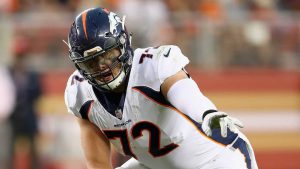 Much like the Oakland Raiders, the Broncos also got little contribution from its rookies. Garett Bolles made the move to left tackle and played well in the final quarter of the season. Bolles plays with a mean streak that shows up in his willingness to finish blocks. The Broncos also got help in the return game from wide receiver Isaiah McKenzie, who was the Broncos 5th round selection. Players like wide receiver Carlos Henderson and tight end Jake Butt were essentially redshirted in 2017 and were not able to help the team in their rookie seasons due to injury.

Turron Davenport: Where Do the Broncos Go From Here?

The Broncos made the first, right decision of the offseason when they elected to keep head coach Vance Joseph around. Now it’s time to get things right with the offense.

The first order of operations will be to get some kind of competent quarterback play. This team can win next year if they approach the offseason correctly. Denver should monitor the Colts situation closely.

If the Colts are willing to part with Andrew Luck, John Elway should be on the phone 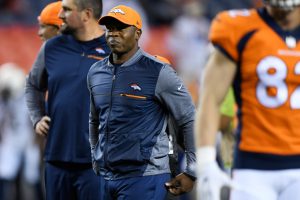 offering the No. 5 pick for him. Kirk Cousins may not return to the Redskins, but is he worth $30 million per year? I would say no.

One way or the other, Elway has to get the Broncos a quarterback. The roster isn’t as bad as the record indicates. They have talent at wide receiver and CJ Anderson is a serviceable running back.

However, if a player such as Saquon Barkley is there when Denver is on the clock, he should be the pick. The team has to make their offense explosive again. Barkley is the kind of player that can score anytime he touches the ball. They can use him in a multitude of ways.

Free agency wise, they need to find a way to fit resigning Bradley Roby into the budget. Having him as their nickel corner allows Chris Harris to move inside and take away slot receivers. Roby, Harris, and Aqib Talib are the best trio of corners in the league. Their ability to smother receivers helps Von Miller and the pass rush get to the quarterback.

Overall, Denver’s roster isn’t that bad. They just need a quarterback to guide the offense.