Chris James: What Went Right for the Browns

Let me be clear that there is nothing positive about going 0 – 16 in an NFL season. It’s only happened one other time in the history of the league with the 2008 Lions matching this record of futility. Now that we’ve established the obvious, let’s look at what went right for the 2017 Cleveland Browns. 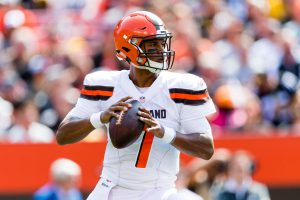 The 2017 draft went the well as they grabbed three 1st round picks. A franchise caliber QB was picked 52nd overall in Deshone Kizer. The 21-year-old out of Notre Dame has the requisite size, arm strength and athleticism that NFL GMs drool over. The Browns added depth at every level with ten total selections.

Again, there is nothing good about an 0 – 16 record but the resultant isn’t the total story. Through all the trials and tribulations, Hue Jackson’s team has been competitive in virtually every game this year. The next step is learning how to close out games when they have leads or trail by 7 or less. The Browns could have easily won half their games in 2017 if they knew how to drop the hammer. This is a far cry from a 2016 season that saw the Browns look defeated early in most contests.

The final game of the season went the most right for Cleveland, even in a loss. Trailing 14 – 0 in Pittsburgh, the team could have easily packed it in and go through the motions. Instead this young roster fought back and had the chance to win but ultimately came up short 24 – 28. The future looks bright if the Browns remain consistent at the two positions that haven’t had consistency over the last decade; the head coach and quarterback must remain in lockstep to give this roster a chance for success in the 2018 season.

Gene Clemons: What Went Wrong for the Browns

What had the makings of a promising season for the Browns quickly turned into another season of ridicule and disappointment based on questionable coaching and front office decisions.

Defensively the team performed well and managed to keep many of the games competitive. Offensively, it was another story. The guy who should be their quarterback of the future, Deshone Kizer, was never given an opportunity to become comfortable in the offense. Whether it was an inability to establish a run game, or the lack of reliable pass patterns that help a young quarterback become comfortable, the offense sputtered. This resulted in Kizer not only struggling, but being the scapegoat for everything wrong with the Cleveland offense. Things became worse when head coach Hue 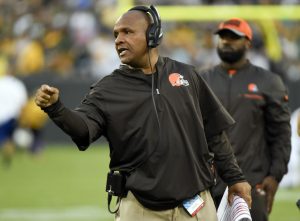 Jackson decided to bench Kizer for a worse option, then the trade-for-AJ McCarron-that-wasn’t ensured the Browns would once again be the laughingstock of the league.

Sashi Brown was the other scapegoat for the lack of on-field success and it cost him his job. It was a curious firing since he was a cap specialist and used analytics to determine pick value. Cleveland possessing numerous draft picks, tons of cap space, and good young talent was not enough.

Many (falsely) believe the Browns need to address the quarterback position in the draft again, but they have a chance to land real, impact talents at running back, defensive back, and receiver. For their sake, they need to improve their overall team and give Kizer the opportunity for growth that he needs.

The Browns nailed it with the talent it brought in this past offseason. Myles Garrett had an outstanding rookie season and will be a force for Cleveland for years to come. David Njoku 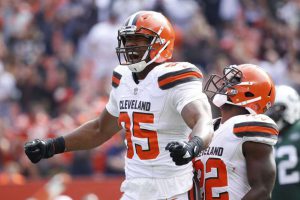 is still raw but his athleticism is palpable and will pay dividends in the near future. Jabrill Peppers flashed his athleticism not only on defense, but in the return game, while the embattled Deshone Kizer showed more than enough poise in an untenable/ unenviable situation to warrant another chance with better surrounding parts in 2018. The Browns also acquired two talented defensive linemen in defensive tackles Caleb Brantley and Larry Ogunjobi who will team up with Garrett to form a formidable defensive front for the foreseeable future.

Turron Davenport: Where Do the Browns Go From Here?

The Browns have their quarterback in place and have a solid defense. That’s a start. Cleveland needs to stay the course because they have been destroyed by constant turnover over the years. 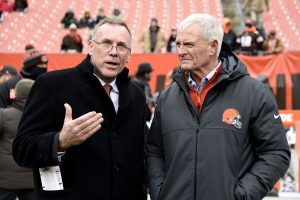 They will have two of the first four selections in the 2018 NFL Draft which will help them add talent to the roster. The blueprint has been established by the Eagles, Cowboys, and Rams…give a young, talented QB weapons.

The Browns should strongly consider adding a player such as Penn State’s Sequan Barkley that can make their offense more dynamic, specifically as a running back. Adding a slot receiver such as Anthony Miller in the second round would provide another player that Kizer can deliver the ball to and gain yards after the catch.

With the help of the draft and some key free agent signings such as making a play for 49ers free agent safety Eric Reid, Cleveland will be in good shape.

What We Thought Heading into the 2017 Season