Chris James: What Went Right for the Bucs 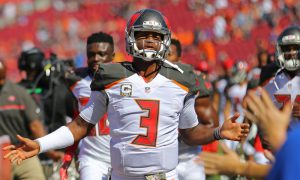 I’ll start by admitting that this was my pick to win the NFC South. The Bucs were the ONLY team that didn’t have a chance to take the division this season; MY BAD. So, what went right for the Bucs in a season that saw them underperform constantly?

Jameis Winston learned how to throw the ball like an NFL QB. There is plenty of time for the former top pick to progress as Winston is STILL 23 at the time of this write-up. This will be a process with Winston, but the tremendous upside is worth the effort. There was also the emergence of a match-up nightmare named OJ Howard. He will become a large piece of the offense as the coaching staff gains more comfort with him.

The defense had its stars play like stars throughout the year. Players like Gerald McCoy, Kwon Alexander, and Lavonte David stepped up. David was the clear stand out as he forced and recovered 5 fumbles in only 13 starts. Additional help was gained with rookie LB Kendall Beckwith finding his way into the starting lineup at SLB.

A massive positive for the Bucs is the glutton of young talent on this roster. Couple this talent with a high draft pick and a 4th place divisional schedule. The Bucs could be in for a great 2018 campaign.

Gene Clemons: What Went Wrong with the Bucs

Sometimes injuries hinder opportunity. Other times, it’s bad decisions made by coaches. In Tampa Bay’s case it was both!

The defense was never fully healthy all season. That included time being missed by Pro 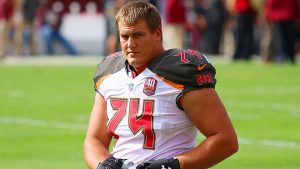 Bowl linebackers Kwon Alexander and Lavonte David, All-Pro defensive tackle Gerald McCoy, and a slew of defensive back injuries. The offensive line sustained many injuries as well, but the biggest problem was most likely made by the coach and general manager.

GM Jason Licht and head coach Dirk Koetter believed they could turn pro bowl guard Ali Marpet into a pro bowl center. While the Hobart graduate didn’t perform poorly, his loss who was truly felt at the guard position which struggle all season. In essence it took one really strong position and turn them into two weaker positions.

That lack of productivity on the line resulted in a substandard run game and spotty pass protection. Quarterback Jameis Winston took the brunt of the blame and the pain to go along with it. He missed his first games of his young career due to injury and fumbled the ball a league leading 15 times en route to a disappointing 2017 for the Bucs. 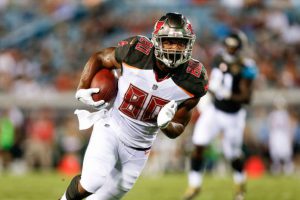 The Buccaneers acquired ultra-athletic tight end O.J. Howard in the first round of the 2017 draft and he provided another target for franchise quarterback Jameis Winston. Howard finished his rookie season on injured reserve with an ankle injury, but prior to the injury, he amassed 432 yards and six touchdowns on a mere 26 receptions. The Buccaneers added another pass-catcher in Round 3 in wide receiver Chris Godwin. Godwin averaged 15.3 yards per reception and started two games as a rookie. Inside linebacker Kendell Beckwith was the Buccaneers other third-round pick, and started eight games despite coming off of an ACL injury in his final season at LSU.

Turron Davenport: Where do the Bucs Go From Here

The Bucs capped off a disappointing season on a high note thanks to a 31 – 24 win over their division rival the New Orleans Saints. What was supposed to be a season in which they took a step forward, fell apart under second-year coach Dirk Koetter.

Their offense sputtered despite the additions of rookies O.J. Howard and Chris Godwin as well as veteran wideout DeSean Jackson. Somehow Koetter survived the dismal season 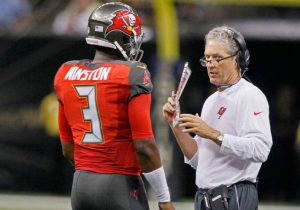 and is set to return as the head coach.

Doug Martin has a $6.75 million cap hit next year but would cost nothing if Tampa decides to release him. If they want to take their offense to the next level, drafting a back like USC’s Ronald Jones III at the top of the second round would be a good move.

Other than running back, they are set on offense. The offensive line is solid and Jameis Winston will always give the Bucs a chance to win.

It’s the defense that will need help. Boston College defensive end Harold Landry should be the selection for them with the No. 7 pick. He instantly upgrades the pass rush which is an area that needs to be addressed.

The secondary is another area that needs to be addressed. Brent Grimes is a pending free agent that should be brought back the right price. Tampa will have plenty of cap space, so making a run at a top-tier free agent such as Trumaine Johnson or Malcolm Butler could be in play.

Regardless of what happens, 2018 is a do or die year for Koetter. The third-year head coach absolutely has to make the playoffs. If he doesn’t at least do that, there will be another head coach manning the sidelines at Raymond James Stadium.

What We Thought About the Bucs Entering the 2017 Season