Warning: Use of undefined constant get_magic_quotes_gpc - assumed 'get_magic_quotes_gpc' (this will throw an Error in a future version of PHP) in /nfs/c02/h03/mnt/16851/domains/footballgameplan.com/html/wp-content/plugins/cforms/lib_functions.php on line 360
 Gene Clemons’ Bucs “What If” Mock Draft – Part 3 | FOOTBALL GAMEPLAN
FOOTBALL GAMEPLAN
Login | Register
follow us:

In the second edition, the Buccaneers decided go with Jamal Adams defensive back from LSU in the first round. That allowed them to address tight end in the second round with Clemson’s Jordan Leggett and defensive end in the third round with still raw but extremely talented Villanova product Tanoh Kpassagnon.

This third installment looks at the likelihood of the Bucs deciding to address their need for a legitimate complete tight end to round out the offensive weapons for quarterback Jameis Winston and the subsequent offensive value selections made as a result of the pick.

Howard, like Jamal Adams, seems to have the least amount of bust written on him in the draft. His ability to flex, play in the slot, and come out the backfield make him a matchup nightmare for defenses but it is his blocking that truly sets Howard apart. He is aggressive and tenacio 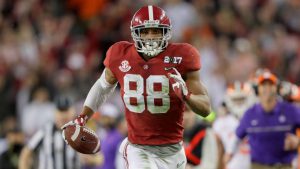 us in-line with not only the strength and technique to cover defenders up in the run game but to finish blocks to the ground. With all that he helped the the Crimson Tide accomplish in his years in Tuscaloosa, nobody would argue that he was underutilized while at Bama. This would not be the case if he is snatched up by the Bucs at 19. Howard could be what everyone in the organization wanted Austin Sefferian-Jenkins to be when they drafted him a few years back. The difference is that Howard is more explosive and a far more natural blocker than ASJ is. He also gives the Bucs something they really need in a play-action style offense; he gives them the ability to disguise. Currently the two tight ends on the roster are Cameron Brate who is essentially a big slot receiver, and Luke Stoker who is an offensive lineman with an eligible number. Howard can fill both their roles in one allowing them to return to specialized roles and therefore improving the offense. 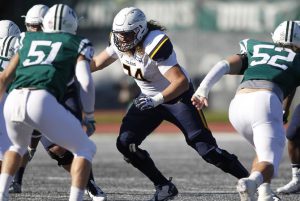 long, rangy, explosively athletic defensive ends of the NFL today. He comes from a program that has thrown the ball a lot but also one that does damage in the running game. That versatility in the offense will make his transition to the NFL smoother than many others. Norton shows a patience and poise many young tackles don’t possess. He never seems to be in chase mode. “Norton knows when to strike quick and when to show patiences,” notes footballgameplan.com CEO and draft aficionado Emory Hunt. That ability makes him valuable and in a draft where offensive tackle is not the premier position, will most likely see him still available for the Buccaneers when they pick at 50. He can provide the true left tackle that they left and allow them to move current left tackle Donovan Smith to the right side where he seems to be a more natural fit, or even inside to left guard. 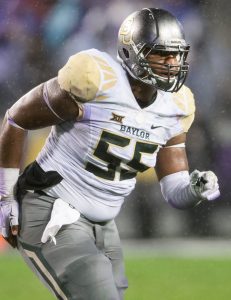 Fuller is your prototypical center. He is extremely strong at the point of attack and understands how to fight the power nose guards in the league. Though many think of Baylor as this pass-dominant offense, Fuller was the anchor of an offense that has found success over the years on the ground as well as through the air. Many NFL defenses are employing the quick and powerful nose guards who can turn speed to power and displace the line of scrimmage. Fuller would be the perfect foil for those defensive plans. “He is next to impossible to move off the spot!” notes footballgameplan.com’s Emory Hunt. “Even if he’s met initially with power, he is able to absorb and redirect defenders.”

While many might question the Bucs taking two offensive lineman in their first three picks, remember that the center position has been unstable over the last couple years because of injury and although Joe Hawley and Evan Smith are respectable centers, the ability to add a young bull of an athlete to a young emerging offensive line is one that can’t be overlooked. It may also be an upgrade while saving the Buccaneers some money in the short term.

Check out part one and two: