In the third edition, the Buccaneers went with offensive talent to help blossoming quarterback Jameis Winston. They picked up Alabama tight end OJ Howard with the first pick and bolstered the offensive line with tackle Storm Norton from Toledo and Baylor center Kyle Fuller.

This fourth edition looks to address defending against the pass by addressing the pass rush and pass coverage. 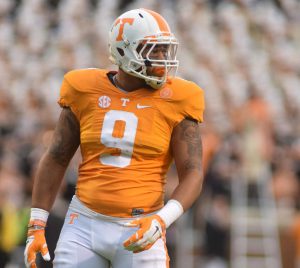 Pass rushing is always at a premium in the NFL and as such there are many positions used to rush the passer. In one of the deepest drafts for pass rushers in quite some time the Bucs are gifted with choosing a highly productive talent in the middle of the first round. While many believe that Myles Garrett and Solomon Thomas are the best options at the position, Barnett is probably one of the most productive in a conference full of productive pass rushers. Barnett possesses great balance and ability to dip and bend which allows him to take advantage off his athletic ability. Barnett will be a great addition to a defensive line that is continuing to grow in talent and ferocity. 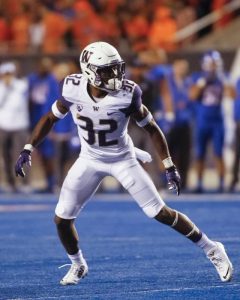 than it should. In this case there’s also preference being given to safeties like Hooker and Adams. So the Bucs have the FBGP #1 ranked free safety available to draft in the second round and they don’t hesitate to make that selection. Baker fills the need for a legitimate back-line defender in the Bucs lineup. He has range and dynamic that will make him a playmaker in the NFL and he will be considered a steal as a second round selection when we look back at this draft in five years.

Tabor is the best defensive back talent in the draft. When you put the film on, he has been a baller for the better part of three seasons. It is there on the film that Tabor separates 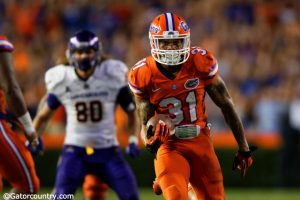 himself as the best corner prospect in the draft this year and his score of 90 is one of the highest grades given out this year for any prospect. The reason Tabor’s available to be drafted in the third round is because of issues outside of the playing arena. He ran a slower than expected forty yard dash time and he has been considered a behavior issue. These negatives, mixed with the ascension of other corner prospects and the high values of various positions in the draft have drastically lowered his stock. The over-thinking associated with the draft will once again cost the bottom dwellers an opportunity to get out the basement with a great talent. Fortunately for the Bucs they want to continue their rise up the ranks and pull the trigger on another pass defender from Gator Country.
Click here to check out mocks one, two, or three and check out the final Buccaneers full seven-round Mock draft this Wednesday April 26th before the draft Thursday night.